"Rokky's great and all, but he's not you, Storm. You helped me during the Battle of Angel Island when I was shivering like a coward, not Rokky. Sure Rokky kept me company when I stayed on Angel Island when Fox threw me out, but you've been such a good friend to me all this time. When I left, I missed your company. Rokky's a good warrior, but no one in Rogue Squad, not even Silver, can compare to you."
—Austin to Storm about Rokky, Storm's Shadow

Rokky the Krokorok is a male Krokorok native to Sandy Gorge Village. He is currently a warrior in Rogue Squad. He was temporarily Austin's friend during Austin's Return and The Lost Fox as well as Storm's Shadow. Because of his temporary friendship with Austin, Storm considered him a threat to his own friendship with Austin, but this ended when Austin and Rokky drifted apart. He is the protagonist of Rokky's Story, and a supporting character in Silver's Escape, Austin's Return, The Lost Fox, and Storm's Shadow. 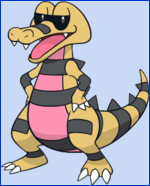 Being a Krokorok, Rokky appears to be a short, anthropomorphic crocodile. He is mostly tannish-brown with black stripes and a pinkish belly. He has a black mask over his eyes that protects them from sunlight. Rokky has short arms and stout legs with three claws on each hand and each foot, functioning as his fingers and toes, respectively. He also has triangular black spikes on his back and tail(with two rows on his back) and a long, diagonal scar on his back.

As Sandile: Rokky was initially timid and shy, but gained confidence when he met a Shiny Krookodile named Anwar.

As Krokorok: Rokky is cool, cocky, and confident. When it comes to battles, he can be very competitive and eager to win.

Before the Series/Rokky's Story: Rokky was born in Sandy Gorge Village as the younger son of Ronk(meaning 'ground') and Ryala(meaning 'pretty) and the younger brother of the Shiny Krokorok Sandstripe, but Rokky was frequently bullied by Sandstripe and Ronk because he wasn't Shiny, and Ronk preferred Shinies to regular Pokemon. Rokky was frequently saved from the bullying by Redspin, a Melanistic Blastoise(named for his red shell). A patrol of warriors from both The Outsiders(led by Nero) and the Shattered Army(led by Shatter the Chesnaught) attacked the Village and attempted to abduct young Pokemon, but-as always-they were thwarted. Rokky fled, encountering a pair of rogue Pokemon-a Houndoom and a Liepard-who chased him away, with the Liepard giving Rokky the scar on his back that has to this day. He soon ran into a Shiny Krookodile named Anwar, who spoke a strange ancient language fluently(even greeting Rokky in said language). He was willing to teach Rokky the strange language while raising him. After Rokky evolved, it was later revealed that Anwar was working for Eggman, who would later arrive and bully the Shiny Krookodile into rejoining him, threatening him with sharing Torch's fate(since this even happened after Torch died). An unknown time afterward, Rokky joined The Megastone Rogues, going with Silver when the Lucario left to form Rogue Squad. When Silver contemplates making Rogue Squad part of the newly-formed Storming Alliance, Rokky tells the Lucario that no matter what, his warriors will always be right behind him. An unknown time after that, an extremely distracted Rokky loses to Raikon the Raichu(who he has a Type-Advantage against), and decides to set out to find the source of the strange visions he'd been having. He is accompanied by Storm, and they come across the ruins of Grassy Root Village, where they meet Reecko the Sceptile's nephew Slash the Treecko(grieving over his deceased father Blake), and Storm's sister Shell. Slash tries to attack them, but is beaten by the more experienced Rokky. Shell stops the fight when she recognizes her older brother.

The War of Time/Storm's War: Rokky makes his only appearance when he is sent out for reconnaissance alongside Cori, since they can both use Dig to hide themselves. In Storm's War, he returns first and gives a report.

Austin's Terror: On his way to Angel Island with Dragonite, Austin is frightened by a sound he hears, and Rokky stumbles out. The Desert Croc Pokemon asks if he startled Austin, who spits that "startle" was an understatement, growling that he thought that he was Finitevus. Dragonite then leaves, and Rokky accompanies Austin to Angel Island, constantly chatting until Austin tells him to shut up. They soon arrive at Angel Island.

Austin's Return: Rokky first appears in the first Chapter, after Austin wakes up from a nightmare. Austin wonders aloud if the Dark Legion to return, prompting a half-asleep Rokky to respond that people had been causing trouble for a very long time before he falls completely asleep again. Austin gives him a friendly shove before heading out to take a walk. Rokky later witnesses Austin get captured by Finitevus, and hurries off to find Knuckles and warn him. The Krokorok later helps Knuckles and the newly-arrived Lucky the Lucario find Austin and returns to the Base with his fellow Alliance warriors to save it when it's under attack.

The Lost Fox/Storm's Shadow: Rokky is a minor character in both stories. When Austin falls in beside Rokky, Storm is disconcerted and unhappy. This is worsened when Austin settles next to the Krokorok, teasingly calling him "croc-breath", to which Rokky retaliates with "furball". In Storm's Shadow, after Austin wakes up from his coma, he talks with Storm about Rokky. Storm unhappily states that Austin had been hanging with Rokky more. The brown-and-black warrior sighs and says that Rokky was great, but not as much as Storm. He goes on to say that Storm helped him in the Battle for Angel Island, not Rokky, and that no one in Rogue Squad compared to Storm.

Rokky's current Ability is Intimidate, though this is unmentioned

Rokky is naturally adept at digging, and often combines his other moves with Dig to surprise his enemies. He also chooses to dig when doing recon

Being a Ground-Dark Type, he is weak to Water, Grass, Bug, Fighting, Ice, and Fairy; He resists Poison, Rock, Dark, and Ghost; He is immune to Electric and Psychic; He cannot harm Flying Types; He has a Type Advantage over Fire, Rock, Electric, Psychic, and Ghost Types.

Retrieved from "https://sonicfanon.fandom.com/wiki/Rokky_the_Krokorok?oldid=1800575"
Community content is available under CC-BY-SA unless otherwise noted.