Rocky is an awesome guy. If only he'd smile more. 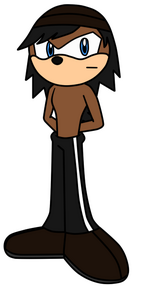 Rocky the Porcupine is an original, anthropomorphic, North American Porcupine created by Pumpituppartyzone. He is 112 cm tall and weighs 41 kg. He is a member of Team Scythe (Kye the Cat as speed, Mizuki the Chameleon as fly, and himself as power). He is a mute, meaning that he cannot speak. He has a small crush on Candy Bee. He was created on the Male Furry Dollmaker.

Rocky has a pretty good sence of humor. He likes to laugh (even though no sound comes out), and enjoys a good joke. He is a pretty enclosed person to anybody that he isn't friends with. He usually ignores people that irritate or annoy him. Rocky communicates using a white board, eraser, and dry-erase marker. He absolutley hates the color purple, and his favorite color is brown. He likes to wear hats, even when he's sleeping, and also enjoys racing. He is a smart person, and is good with making extreme gear for people. He isn't necisarilly a mechanic, however.

Rocky is a powerul fighter, but gives up easily. He can use the Spin Jump and Spin Dash like most people. Like Petunia the Porcupine, he can use the Quill Shoot and Quill Dash. Even though he is a Power Type, he can also use the homing attack. Rocky is also a very talented artist. He can draw things very realistically, but is also a good cartoonist. Rocky has acid spit, and can spit on anybody to burn them if he wanted. Because of his good nature, he doesn't like to use his acid spit. He can also control whether his saliva is acid or not.

Rocky is an unlockable player in Baseball Party Zone. He is unlocked by beating Story Mode. He is a member of the "Kou Killers", and is a power type character.

Rocky and Mizuki have been friends for a long time. They are the best of friends, and have been in the same classes for their entire school career. Mizuki always tells everything to Rocky, even though he doesn't always listen.

Rocky on the Male Furry Dollmaker 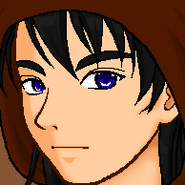 Rocky in anime. Made at http://foxrichards.deviantart.com/art/FaceMaker-52755515
Add a photo to this gallery
Retrieved from "https://sonicfanon.fandom.com/wiki/Rocky_the_Porcupine?oldid=1043641"
Community content is available under CC-BY-SA unless otherwise noted.