The Robo Archive is a robot that was combined from Eggman's supercomputer. He was first seen in the very beginning part of the game in Sonic and the Steel of Darkness as a normal computer. During Chapter 7, Eggman tries to reconfigure the machine's superior abilities by combining his old inventions into one. The robot can only attacks by memorizing and copying Eggman's inventions that exists in the past.

He was used to be Eggman's supercomputer from the very beginning. He dislike Eggman but didn't disobey his master. He can be in any network of his machines to operate commands on each of one on them. He's so smart that he knows everything around him. He was consider to be the "Immortal Stalker" that anyone can ever imagine. However, after the destruction of the Egg Fortress, he was resurrected, becoming a living machine and wants revenge to those who killed him.

He was rebooted on his own and created his new body to kill anyone who gets in his way. He named himself Robo Archive the Great (AKA Eternal Robo-A). He puts his brain on the machine to control it and apply the broken experiment on the chest as his main power source. He speaks as a normal person can do but has some speech problems like static noises. He created his own base called the Eternal Colliseum that was made out of the same materials from the Egg Fortress. He has a geeky personality but very aggresive as well. He can morph into 4 machines: one has a tread mill, two is the rocket drill, three has a gyroscope and four is a motorcycle. He can project plasma beams that can harm the human skin. His armor is made out of Magnometal and can control magnetism and gravity itself. Unlike the other robots, he was chosen as the superior of the group.

Sonic: "Another robot, Eggman? Can you ever give me a rest"

Robo Archive: "YOU ARE UNAUTHORIZE, PREPARE TO BE DESTROY, SONIC THE HEDGEHOG" 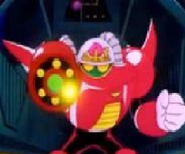 Robo Archive the Great in the anime
Add a photo to this gallery
Retrieved from "https://sonicfanon.fandom.com/wiki/Robo_Archive?oldid=1374162"
Community content is available under CC-BY-SA unless otherwise noted.