Start a Wiki
This is an article about RoboWillow, a character created by Frozen Scorpio on 16/7/2016. 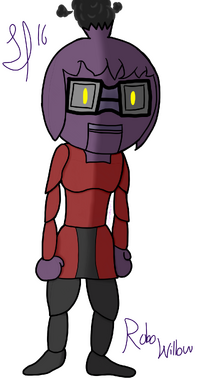 RoboWillow is an abnormality amongst time clones. While usually only doomed timeline Jared's can travel back in time, RoboWillow is the rare case of somebody else obtaining time-travel powers.

RoboWillow, as anybody could easily deduce, is supposed to be a robotic duplicate of Willow Infiern. Her arms and legs are segmented, similar to that of an android. Her colors are a bit darker than the real Willow's, and are painted on rather than being from her natural fire. Other than that, her lack of emblem, and generation of smoke from her hairpiece rather than a flaming ponytail, there's not much else to say.

RoboWillow is a lot like regular Willow, in that they're both motherly and kind to most others and are willing to listen to other people's problems. However, RoboWillow's feelings are more synthetic, working as a program rather than how they normally do, and she has a bit of a superiority complex due to her robotic state, believing she can solve "any problem in a matter of seconds at most." She has more of technical way of thinking about things, having lost her ability to truly feel sympathy in favor of calculations and "perfection." If she ever turns out to be wrong, RoboWillow will enter a state of comedic denial of that event having ever happened or will try harder to prove it with calculations, which usually ends in a problem worsening.

In an offshoot timeline, rather than Jared obtaining the ability to see into the future, it was Willow who obtained it. She used this to guide her son throughout his future decisions rather than letting him see it for himself, and he really didn't mind for a while. After several years, Jared grew upset about his lack of independence and ran off to never be seen again. Willow maintained EQuartz in the shadows for a while, working in place of him. At first this worked out well, with everything going as it should, but one day Willow just could not see ahead anymore. Unfortunately, that day was the initial attack from the Void Ensemble. Without proper planning and leadership, EQuartz quickly fell into ruin with it's members either dead or missing. Willow was alone amidst the destruction and begun to wander, looking for some way to undo it. She still had her ability to travel back in time, and knew it had to be used at some point, but as she had no corporeal body, it just couldn't be done.

Looking through her old home, she found something that wasn't there before. Blueprints for a mechanical body and a note were in one of Jared's drawers. The note read as follows:

Dear mother, if that is who is reading this (if not then please stop reading. I know that won't stop you so I programmed the robot parts to self-destruct should anybody other than me or her touch them.)

If you have found this when everything else has fallen, then it is the right time. Enclosed are, as you should be able to see, blueprints for a robot in your image that I made without you knowing. The pieces should be nearby, all you need to do is properly connect them. You might still be wondering why I left, and that is simple. I had caught sight of some of you future visions in your sleep and had begun piecing things together. I knew for a while that this timeline is doomed and that it would be best for you to escape it when you can. Unfortunately, I may not be able to come along, as it is you who had obtained Chronoclys' powers. Willow, mother, please be kind and never forget who you are and all that jazz. Sorry, I'm not really one for these kinda mushy things, but you know what I-

The rest of the paper had been burned off by accident.

Willow quickly found the pieces, put them together, and had transferred her soul into a Soul Crystal wired into the robot's chest. Now with a proper body, RoboWillow had fled the timeline and left it to be erased. During the time between her leaving her timeline and entering the normal timeline, RoboWillow had entered a form of forced hibernation, where the mechanical side of her was still somewhat active and began taking over, deleting a large portion of herself, mainly most of her emotions and a few of her memories. There was a bit of confusion when she had appeared in the main timeline, but things quickly sorted themselves out. As she has a mechanical body, RoboWillow posed no danger of becoming Temporal Sludge upon death so she was let free to live by her own agenda after a few tests.

Events of the EQuartz Committee: Season 4

RoboWillow, being a robot, has many enhancements over both organics and spirits. She can see clearly in the dark or in any cover like smoke or fog, can generate heat of up to 1500 celsius (beyond the melting point of steel) though this requires a bit of time and charging up to do, can charge off of solar rays (yet still creates smoke for some reason), can release a blast of smokescreen from the back of her head, can fire off her fists like rockets that she controls wirelessly, and has the ability to fly by bringing her legs into her body and converting them into a single jet that constantly releases fire to keep her in the air. She also has a set of turntables built into her body, which come out by letting her breastplate down, exposing a set of amplifiers and two thin rodlike arms that extend out, with said turntables at the ends of them.

RoboWillow, through various upgrades, has obtained the ability to assimilate other technology into herself. Based on the size of said machine, this can take a varying amount of time. For small things like chainsaws and gaming consoles, this can take up at most a minute, while for larger things like bulldozers and other robots, this process can take up to a day without interruption. Once assimillated, the machine's parts are torn apart and absorbed into her while their assembly set is recorded and stored within her digital mind, allowing her to use parts of what she assimilates for whatever purpose they may serve (such as plane wings to help her stabilize in the air easier or wires for connecting to other machines to either transfer/copy data and/or to also absorb,) while everything that she is incapable of processing (such as other machines' AI or programs that serve no purpose to her) is deleted. She is also a decent Disc Jockey, being able to mix-and-match sampled music and sounds to create true masterpieces in real-time, all calculated for success at the right chances.

RoboWillow, despite these enhancements and ability to upgrade only further, feels truly empty inside. She feels little more than temporary self-fulfillment with each completed job then immediately goes back to emptiness. She is incapable of comprehending most organic emotions, only able to feel superior to others and a bit smug, but nothing else. She's fully incapable of having emotions clog up her judgement, which at first sounds great, but leaves a lot of moral-gray areas glanced over at best wherever she goes, especially when it comes to dealing with other robots and even digital lifeforms, any of whom she usually ends up absorbing and effectively erasing/killing them with almost no second thoughts. She's also incapable of absorbing organic material, attempting to do so jams her system and can lead to malfunction swiftly turning into a mindless and uncalculated rampage until whatever failed to be loaded is removed either normally or forcefully, and is recommended to avoid fusing with, as she'd just override and absorb any robots who attempt to Emblem fuse with her while eviscerating most organics who'd try to do so.

Retrieved from "https://sonicfanon.fandom.com/wiki/RoboWillow?oldid=1780924"
Community content is available under CC-BY-SA unless otherwise noted.