Start a Wiki
This is an article about River the Echidna, a character created by KnucklesFangirl on 08/24/2018. 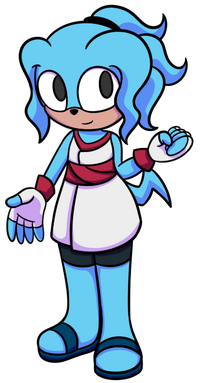 River is an echidna hailing from the island of Ali'ikai, an isolated place formerly unknown to modern civilization. She is imbued with chaos energy, and from it has the power to control water. However, she isn’t much of a fighter, and rather spends her time as a nomad meeting new faces on a frequent basis.

An echidna girl with blue fur and wavy quills that symetrically part down the center of her face. She usually wears her quills in a ponytail, and they typically reach down to her upper-middle back. She wears a red and white yukata-like dress with a short skirt, and black pants that reach just above her knees. She wears dark blue flip flops.

River tries to be the kind of person who sees the beauty in everything. Even in the darkest, ugliest things, she will find something that makes it good. That being said, she always gives someone a second chance even when many others won't. But even then, she's still wary of others. She has a few trust issues, and has a hard time believing that people like her for who she is rather than what she is. So while she can love a lot of people, she feels that not a lot of people can love her.

Regardless, she is very caring and kind to those she meets. Maybe not the most charismatic or the most quirky person, but she does put effort to try and leave a good impression on people. Her ultimate goal is to just make the others around her happy, even if sometimes she's not happy herself.

River is not without her own set of troubles and insecurities. Her natural gift of hydrokinesis has been praised since she was young, and has always been a source of pride for her until recently. After she had left her home and realized that strange powers and abilities were commonplace around the world, her powers suddenly seemed... not so special. She began realizing that not only were her powers mundane by comparison, but that in the outside world, others have only shown interest in her for her rare species and color. They didn't really care for anything other than that. So, it's led River to occasionally lie about her species and powers in hopes that others would care about more than just that. Though unfortunately, these attempts have been fruitless save for a few individuals.

River was born on an obscure, remote island called Ali'ikai far from contact with modern civilization. Unfortunately, River was born very ill, and was teetering on death for the island’s more primitive medical knowledge couldn’t save her. Losing hope, her parents turned to a last resort, and exposed River to a chaos emerald that had recently appeared on the island (as the emeralds seem to enjoy popping up wherever). To their surprise, its power not only had restored her to health, but had changed her color to cyan. Shortly after, the emerald disappeared, vanishing to another part of the world.

So from that point on, River’s parents raised her normally. Of course her odd colors earned some strange looks from other residents, but no one was necessarily disturbed by it. But at around the age of five, the girl had learned that the emerald had also gifted her the power to control water. Excited, she immediately began to show off to as many people as she could, and well, they were impressed, and figured this could be way more useful than just party tricks.

Once she had gained better control of her powers, River helped out in all sorts ways around the island. She fished by lifting schools of fish out of the ocean in a bubble, she helped sailors around the island by moving the waves to their advantage, and she could dive down and bring back up valuable treasures or artifacts that had been lost to the ocean. Everything she did made her a local celebrity. But sometimes, she had stumbled upon items in the water that she had never seen from her island. Things made out of glass, or metal, and after finding enough of these things River and some others figured that there might be a world outside of Ali’ikai.

In previous centuries, many sailors had tried to leave the island, but never returned, so everyone was more than a little hesitant to go out into open waters. But in centuries before, they didn’t have a girl that could command the ocean. So after some debating and preparation, River alongside the island’s best sailors set out to the waters in search of more land.

After some time, they arrived ashore a mainland continent, and even met locals, which they were a bit shocked by considering no one has seen any species different from them in centuries, while the locals all believed echidnas to be extinct. But after this encounter, the mainlanders had established a peaceful line of contact between them and Ali’ikai, and in the months that passed there has been introduction of modern technology to the island, as well as outsiders traveling to visit the island.

While River could have gone home and enjoyed the rest of her life there, something deep down had bothered her. There was a whole world that had just opened up to her and yet no one in her village had the courage to explore it? River has always been on the timid side, but for once this felt like something that called to her. So… she decided to set out, and start venturing around this newly discovered world.

River has the ability to control water in any way, shape, or form, though she prefers to control it in a liquid form as it's easier than vapor or ice. She has more capability when surrounded by a body of water like an ocean or a lake, but her power is practically useless in a desert. Her preferred method of using water in combat is to make "claws" around her arms that are similar in form to the claws that echidnas in the real world possess.

Water Claws - River can make large, claw-like appendages around her arms out of water. They can be pressurized to slash, but that’s not necessarily practical. She usually utilizes the weight of the water instead to hold down or push back an opponent. Outside of combat, River can “dig” with her claws, using the water to soften the ground.

Sailing - Being born on an island that has a rather large dependency on fishing, River knows quite well how to travel open water by boat. Not necessarily with modern boats however, but rather with smaller, more primitive vessels that rely mostly on wind power.

Chaos Dependency - River's life is directly attached to the chaos emeralds. If they are damaged, she feels pain from it, and if they are drained, she can fall into a coma. And if somehow the chaos energy imbued in her body is removed, she will risk dying within a short time span.

No Combat Training - River never learned exactly how to fight with her powers, as it was never necessary. She never had to fight anyone or anything growing up and was never in a dangerous situation. So far she's only been able to teach herself very basic self defense, but she has very poor spatial awareness and lacks the confidence to fight well. 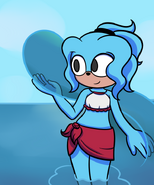 Some water powers and swimwear I guess

In kinda tribal body paint that has more significance in her homeland
Add a photo to this gallery
Retrieved from "https://sonicfanon.fandom.com/wiki/River_the_Echidna?oldid=1832049"
Community content is available under CC-BY-SA unless otherwise noted.