Start a Wiki
This is an article about Ripper the Rat, a character created by JokerJay779 on 10/7/2014.
Ripper the Rat 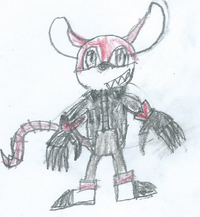 A sadistic and cruel individual he enjoys causing pain to others. He loves to torture the Egg Soldiers who messed up by operating on them and giving them more cybernetic upgrades. He especially loves to do it with his own claws. Also he is known to get to fits of rage. And when does he starts shouting many swears words that get censored.

He was born in the bad part of town in Empire City. Since he was a young kid dissecting a frog in school he loved to cut things open. He wanted to finish Medical School and become a doctor. But they kicked him out because he was too violent when he was doing an operation test on a dummy. He then became an criminal who leaves claw marks as his calling card.He was then hired by Roulette to be the one leading his troops out in the field.

Because of his highly violent nature he fights like a beast. Which makes him a little unpredictable. He also knows a little in fighting since he lived in a tough neighborhood.

Retrieved from "https://sonicfanon.fandom.com/wiki/Ripper_the_Rat?oldid=1545874"
Community content is available under CC-BY-SA unless otherwise noted.