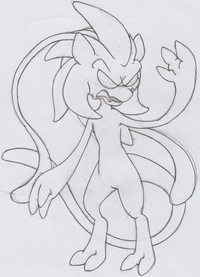 Ripley, codenamed "Alpha", is an Advanced Chaos Creeperhog created by Bubonic the Hedgehog. Her kind are designed to be a powerful fighting force, and she is the first of these Advanced Creeperhogs to have been created.

For the most part, she resembles a larger Chaos Creeperhog, but more stylized, and more powerful-looking. Two long tendrils extend from her head to join with her quills, and her eyes are completely acid green. She also has a long, prehensile tail. She has two thick fingers and a thumb on her hands, and two thick toes on each foot.

Her creation came about when Bubonic decided that he wanted Creeperhogs that were more than just suicide bombers; he wanted much stronger ones that could fight, and only explode as a last resort. He started to experiment with their DNA, and after months of testing, one was finally in the process of being created and perfected; that one was Ripley.

Attack of the Creeperhogs is her debut, and therefore the RP where she first wakes up.

Apart from Chaos manipulation, Ripley also has surprising durability, and can go into a liquid state to avoid attacks, just like Chaos himself. She also has great physical strength, and a high-level healing factor. The long tendrils extending from her head are fully prehensile and mobile, and her tail is prehensile as well. She frequently grabs her foes with her head-tendrils and pulls them up close to deliver a punishing bite.

As with all Creeperhogs, she can explode into a powerful blast of raw Chaos energy; however, this ability is now used as a last resort attack. She also explodes upon death, but will eventually regenerate as she has Troll DNA.

She draws power from outside sources of Chaos energy to become stronger, be they Chaos Emeralds, particularly high-level Chaos wielders, or even those who are comprised of a large amount of Chaos energy.

Unlike the regular Chaos Creeperhogs, Ripley is capable of growing stronger if she absorbs enough Chaos energy. It is rumored that she can even absorb Chaos Emeralds to take on more powerful forms...

Ripley has a minor resistance (roughly 15%) to all base Elements, and she's also resistant to Psychic energy.

Ripley's weak to Soul energy. She also has no resistances to any of the Advanced Elements. Her speed and reflexes also aren't anything special, although they're not terrible.

Ripley displays full loyalty to Bubonic and Rageik only; she refuses to obey anyone else, and may even attack them if they aggravate her. She has a bit of a sadistic streak, and seems to enjoy fighting.

She also has a fondness for meat.

Retrieved from "https://sonicfanon.fandom.com/wiki/Ripley_the_Chaos_Creeperhog?oldid=1833318"
Community content is available under CC-BY-SA unless otherwise noted.