I swear to god, I can and will end your life right now if I want to. Stay away from me, and stay away from Oliver. He is mine! 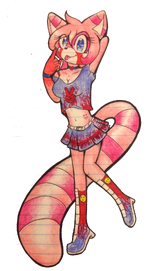 Rin the Red Panda is a female, anthropomorphic red panda owned by Nikki-Kaji. She's one of the most chaotic and dangerous teenagers living in Sojiro, and she hasn't been caught yet.

Rin is a slenderly built female, Mobian red panda standing at 3 feet tall exact, and weighing 70 pounds. She has pink fur with dark pink stripes along her tail and ears. She also had blood red hands that fade into her normal pink fur. Rin’s muzzle is white with a huge red strip on each side of it, which she claims to be the blood of her victims, and her inner ears are white as well. Her eyes are royal blue, with three lashes on each, and are separate. Rin’s hair is short, and she usually wears it messy. Her hair reaches about her neck, while her tail is about 2 feet long. Finally, Rin has a small smiley face tattoo on the left side of her stomach that is clearly visable.

Rin’s clothing takes the appearance of cute yet deadly. She wears a short sleeve, jean off-the-shoulder crop top with blood red splatters along the bottom along with a blood designed peace out sign. She wears a short jean skirt with blood splatter designs all across it, and a white belt. Her boots are the same color as her clothes, fading from red to blue that’s supposed to be the illusion of blood dripping down; also having a small, yellow smiley face on the side of each one.

Her Parents and Their Deaths

Rin’s mother, Hotaru, was a yandere just like her, but a bit more on the crazy side. She was a beautiful woman that seemed very sweet and gentle when you first met her. But deep down, she had an evil, rotten core and didn’t want to anyone near her true love, Sora. She would murder girls that would be anywhere close to winning his heart over, but never took the blame as she always cleaned up after herself. Since Sora only knew the good side of the woman, they ended up together and had Rin.

When Rin reached the age of 12, her father had stop coming to the house as much, claiming that he had to work overtime at his job. One day, Rin and her mother followed Sora to his “job”, finding out that he was really going to another woman’s house behind their back. Hotaru confronted Sora and the woman he was with, and the three of them began to fight. Rin decided to get out of the car, and that’s when she saw her mother finally snap. Pulling out a knife, Hotaru stabbed the woman several times in the house, her husband unable to stop her. After the woman was dead, Sora hit his wife, causing her anger to build up. Rin yelled at her mother, telling her to stop, but it was too late. The knife went straight through Sora’s chest into his heart; his own wife ending his life. His body fell next to the other corpse, Rin crying after just witnessing two murders by the hands of her mother, one victim being her own father.

Hotaru took Rin home, and the girl was never the same since that day. Rin had become mentally unstable, and was unable to remove the image of her mother killing her father. It made Rin angry at her mother for taking away her own father. One day, Hotaru’s mother forced her to get rid of anything that had to do with her father, including a pearl necklace which was the last thing he’d given her. Snatching it off of Rin’s neck, it broke. Finally, Rin killer genes finally kicked in and she snapped. While in the kitchen, she grabbed a knife and killed her mother then and there, unable to think twice about what she was doing because of all the anger built inside of her.

After killing her mother, Rin packed up the things she needed and left her home forever. When police discovered both the murders of Sora and his girlfriend, followed by the death of Hotaru, they believed it was an act of suicide over the loss of her husband. Since Rin was nowhere to be found around the house, they thought there were possibilities that her mother died trying to defend her and died in the process, Rin getting kidnapped or even killed. Of coarse, this wasn't the case, but no one knew that.

Unfortunately for Rin, since she was only a child, getting out of the city wasn't so easy. She decided to stay hidden for a while, trying not to draw much attention to herself. However, this did not work out the way she wanted it, as she was reported by citizens to the police and was captured. Afterward, she stayed in a foster home until earning enough money to move out and live on her own while attending Sojiro High School four years later. During those four years, she hadn't committed a single murder since her mother. But that was about to change.

Rin's currently ongoing school year. She is currently in her third year of high school, and plans on once again attending Sojiro High for her final year...if the school doesn't shut down, that is.

Recently, students attending Sojiro High have been either dying or mysteriously disappearing. There has not been enough evidence to tie anyone to these murders, but most are being caused by bad equipment in the school. Some students have moved away, others are just really aware of their surroundings. But no one if safe from Rin; especially when they mess with Oliver...

After the murder of so many close ones at Sojiro High, friends and even family, Oliver has officially become delirious. Rin noticed that he wasn't the same; more quiet than usual. People started to bully him, calling the male a "bad luck charm" since all of his female friends were being found in terrible accidents. They started leaving flowers on his desk and writing cruel things, all until he couldn't take it anymore.

After a while, he started skipping classes. Rin became worried one day after he started just wandering around campus, and attended no classes at all. It was during lunch when a student started shouting and screaming for teacher's help, saying that a student was on the roof. Rin only expected the worse. Everyone stood up from their seats and ran outside, Rin shoving everyone as she made her way to the door. All of her nightmares were becoming reality.

Rin's personality can be very hard to read sometimes. Her mind has been screwed up ever since her parents died. When she's around her crush, Oliver, she usually acts sweet and cute to draw in his attention. Oliver means the world to her, so she makes sure not to act violently when around him. Although, sometimes she can act a bit creepy towards him, sometimes doing things like taking pictures of him, recording his voice, or even following him around.

When Rin sees another girl flirting with Oliver, something bad goes off in her, her personality taking a complete turn as she goes from a normal, caring girl to a cold, deadly murderer. Rin has threatened girls that have messed with Oliver, yet they are never able to confront her due to her ability to act harmless and cute. If a girl gets a second strike, Rin will snap; craziness and anger taking over her body. She is able to commit a crime and hide her evidence, people unable to tie her to her killings as one by one, people start to disappear.

If Rin is alone, she will sometimes cry about the loss of her parents. It might also be caused if Oliver gets hurt or if he tries to do something life threatening. She is willing to die for her love, and will do whatever it takes to make him safe.

Despite her feminine appearance, Rin is known to have mass amounts of physical strength and stamina. She discovered this strength after mentally snapping years ago and killing her mother. An example of her strength is being able to break away from two policemen after almost being caught, which also gave an example of her stamina as she was able to run for a very long time in order to loose them. Along with that, she has enough strength to use a knife and kill somebody without getting caught. This would mean that she has to make sure they don't get away, make sure no one sees, and clean up all of the evidence, which requires great skill.

In order to be a good killer, you have to be both very skilled and intelligent. Rin thoroughly thinks out all of her killings so that she is unable to be captured. These are a few of Rin's rules to getting away with murder:

Mayu is Rin's very loyal chao companion, and could also be referred to as "partners in crime". This evil chao is tied to Rin, and her main purpose is to help with the murder of girls who try to steal Rin's love, Oliver, away from her.

Retrieved from "https://sonicfanon.fandom.com/wiki/Rin_the_Red_Panda?oldid=1780332"
Community content is available under CC-BY-SA unless otherwise noted.