Start a Wiki
This is an article about Rin The Hedgehog , a character created by Tynic The Hedgehog on 01/26/2015.

"Why don't you show me…what you've got?"
—Rin Intro in Allstars EX 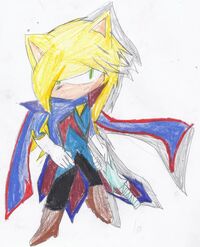 Rin is a good-looking hedgehog with golden fur. He wears his normal attire that is Light-Blue sweater Vest and his Blue uniform with detached sleeves with Black leggings,white gloves and Brown Boots. As a child he wore all blue all the time. While his other siblings wore different colors.

Rin is sardonic, aloof, and abrasive. He has a little compunction with killing anyone who gets in the way of his goal. Beneath his gruff exterior, however, Rin does possess a softer, more compassionate side. He chooses to keep up his public front because of the path he chose – that of revenge for his family. Insults doesn't really effect him a lot, he just brushes it off. Rin has a love to fight and at an extent his Brother,Regine. At times he goes crazy when he see's his brother that includes change in voice. Other than that Rin doesn't screw around when he fights and he will defeat anyone at all cost

Before he was cocky and abrasive (thanks to his brother) He used to be nice and really compassionate around his family. Once his parents died He was left with his brother and sister Regine and Emilia. Even when fighting he made so dumb comments that lead to his defeat. He got really crazy after his brother spent more time with Emilia (Not knowing she was in critical condition) than him. He did the unthinkable and he was about to slain his sister until Regine stopped him. Which Rin slashed Regine chest and eye, leaving him for dead.

After taking his cruelty out on his brother,Rin was taken to an Academy which is in Tri-City. From there he learned his abilities and studies through his tutor Amelia who later find his his brother,Regine. As Rin kept with his studies and learned certain things no one would ever know about. So Five years Later he was trained to be an elite of his Academy.(Which is Now known as S.O.U.L). There were rumors going out that Blood-Rain was coming, Curious Rin was eager to see who it is. Rin Left off to find out who this Blood Rain is.

It Turns out that Blood-Rain is his Brother Regine, He became ecstatic to meet his brother in years and his psychosis caused him to be eager to kill him and fulfill his destiny. Which resulted in his defeat. As he wanted to escape, he makes it to the outside of the building then collapses. Meanwhile He was taken to intensive care. He wakes up in his room at the S.O.U.L Academy. Thanks to Amaya finding his unconscious he wouldn't have make it.

Many years later he actually a bit of respect from his brother after that incident that happened years ago. He does have a feeling for killing his brother after a while but when he wants to, he changes his mind instantly. He was later sent on missions to prove if he was enough to be a hero which he has. On Paradise Islands he is named the Paradise Hero which was originally Tye's name. He doesn't really have time to have fun because he has a lot to do as a hero which led him to being this way.

Rin is exceptionally well trained in battle which he is reward with his new blade.He is now wielding one of the angel blades named Skyfall Swiftblade, He also has the ability to control Astrakinesis which is astral energy wielding this he can control just about anything in space and Cyrokinesis. His swordsmanship as well as his powers rival and contrasts that of his brother Regine. Other Moves include

(E-YA-SHA) A skill learned by Rin which he can take one slash and create multiple wave slash. Meaning that if he even misses his target they still can get hit by it.

==== Soul Projection Rin can create a clone look alike of himself,tricking anyone who would attack it. Anyone who attacks the clone will be instantly stunned and vulnerable to attacks. ====

==== Astral icymania The only move the Rin could use be cause of his low boiling point. This move is only a last resort move. Basically He loses control of his ice and Astral manipulation creating a giant black hole sending them in to an endless void of Ice. While in there you can't attack anyone which means he ultimately defeat you. He uses all of his attacks and makes you beg for mercy. If he has mercy he let you go severely wounded but if he doesn't he'll close the hole trapping you in the void. ====

Rin has two weakness which is any type fire and his personality. The only reason why he hate fire is because he can't use his astral or ice abilities. It weakens him to the point that he can't even throw a good punch or kick. He tries to resist it sometimes but it doesn't work. It'll just leave him vulnerable to any attack. Another weakness of his is his personality, It can get out of hand at times giving him the disadvantage in a battle. Like when he is fight his brother, his voice changes and just like that his energy decreases. His personality is his greatest weakness.

Retrieved from "https://sonicfanon.fandom.com/wiki/Rin_The_Hedgehog?oldid=1872901"
Community content is available under CC-BY-SA unless otherwise noted.