This is an article about Rika the Mink, a character created by Darth LeatherTouche on 07/6/2013. 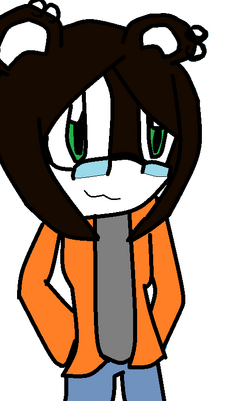 Rika has brown fur that covers most her body and has a white nuzzle; the insides of her ears are as well. She wears glasses since she has bad eyesight. Most days she wears her trademark orange jacket and jeans, and wears her hair down, like usual as a bob. she has Ocean green eyes that are ofren hiden under her rectangular glasses.

Rika is often seen to be well mannered and very intelligent for her age, and often thinks of using the logical explanation and using only logic. She seems to love robotics and does it as a hobby but isn't that skilled and can only make small wind up robots.Her main love is tea, and she seems to love it so much and did once even fake she had to go just so she can drink tea. Despite this she does show to be a good friend but does love her tea more. Rika sometimes cries randomly claiming she doesn't want to talk about it and can sometimes even scream.

Rika originally came from Mercia and was taken away to the Kingdom of Acorn at the age of 6 due to Robotnik's forces getting to Mercia. Rika was raised in a village a bit far from knothole by her older sister Ash and at the age of 9, herself and Ash and were found and taken away as they watched the village burn, later to be robotiscized. Later, Rika and Ash were rescued after the endgame arc and was only de-robotiscized when the Bem had de-robotiscized all those affected.

Rika had started working for a teashop a few weeks later and she mentions only doing it because they make the best tea in the city and the workers get it for free. Being told by Ash what its like being a freedom fighter and how interesting it is she did also join team freedom and was on the freedom fighter team that defended robotropolis. While being in team freedom she did meet Amy and at first found her annoying becayse how she loves Sonic but later warmed up. According to Rika she met Mina Mongoose in the teashop and they started off a bit rough because she had accidentaly spilt tea over Mina's lap; that upseted Mina and did cause them to not really like eachother though Anna wanted it and later apolygized properly.

Rika doesn't really have many skills and her proper skills are cooking and robotics, she seems to be at a high level in both but isn't a expert.

Rika apparently has weaknesses to anything that is athletic or involves a lot of walking, she also can't open things and doesn't like getting dirty. Her other weaknesses are her phobias which are: Heights, water and germs.

Rika cosplaying as Kagamine Rin
Add a photo to this gallery

Retrieved from "https://sonicfanon.fandom.com/wiki/Rika_the_Mink?oldid=1800028"
Community content is available under CC-BY-SA unless otherwise noted.