This is an article about Rico the cat, a character created by Megaphantaze on 12/15/2013.

"I am forced to fight against evil. The only thing I want is to stop the violence and have you on my side. With you, I can start a new life as pasifist and protector of you"

— Rico conveincing his love to Alaina the Fox

Rico is a green cat, who has a long green hair and green ears (Can't be seen under the hat). His attire includes grey hood and yellow t-shirt. He also has blue tie, black hat and red shoes.

Rico is serious man, but really emotional and honest person. He is very handsome but haven't used to be with women.

Rico doesn't normally have friends, but Espio has a huge loyalty to him. He approves his decisions and tries to help him, when he has time for it. Most of his time, Rico is sitting on tree and waiting, since he doesn't have anything else to do.

Rico lies against the tree waiting his girlfriend, Alaina the fox to come and see him, whenever she has time for him. Rico has proved to talk like romantic person, although his shy attitude among girls.

Rico is a freedom fighter from Shell king's universe, who protects the universe from Fibrator, who tries to get Rico to jail innocent. Fibrator always tries to figure ways to arrest Rico from nothing. If he succeeds, he will turn Shell king's universe into Fibratoria, his own criminal paradise. Only Rico can keep this robot away from his plans.

He had enough of his life as a world saver and gave the job for the other guy who have trained to the job. However, Fibrator gave a curse for Rico, which makes him fight, although he doesn't want to. Rico left his universe and gone to Mobius, where he met Alaina the fox. They had something what they shared and fall in love to each other. Rico this way learnt that life is more than fighting.

Rico can control pulses and revive death people. He can also use pulse to create powerful pulse blast.

Rico can also control all sorts of electricity and use it as weapon.

Rico has red pulse gun in need for some emergencies. The gun has tazer effect, which gives electric shock for an opponent. The gun has also other variable electric modes, such as electric whip, electro beam, etc.

Rico is forced to fight wih a curse he has. It's said there's a way to get rid of it, but it's not told in anywhere. He have thought, that there must be a person, who can break this curse.

He is really kind, although he has problems with straight talking sometimes. It's because he is shy and had anti-social past as freedom fighter

Yukon the robot emperor (Rico rarely fights with this guy)

Colina the fox(Rico seems not to understand Colina at all. Although he shows his policy, he doesn't like her attitude)

Rico can move quickly by making pulse dash. He can jump on walls quickier by using pulse jump.

Rico is really emotional, so he can't kill any one. He is also vulneravable for to fire.

"II have been created to protect our world and stop the insane man from turning our known world into a monster" Rico's main quote, referring to Paramore's song "Monster"

"Release me from my curse. My sense says you are the key for breaking this curse" Rico for Alaina, when he realizes, what Espio means with "Someone, who to protect"

"I don't want to fight with you, but the invincible power inside me is forcing me to do it" Rico, when he met Knuckles on his trip to Mobius.

"I will have someone who to protect? Who?" Rico, when he talks with Espio, who tells a hint about being cursed to fight.

Rico and Alaina has met each other 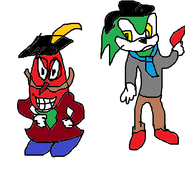 Fibrator the dictator (on the left) is Rico's arch nemesis 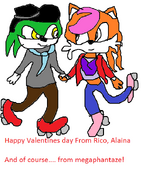 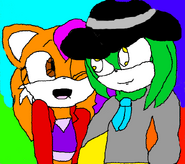 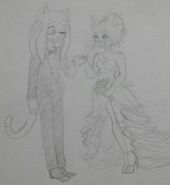 Retrieved from "https://sonicfanon.fandom.com/wiki/Rico_the_cat?oldid=1634832"
Community content is available under CC-BY-SA unless otherwise noted.