The game starts with Ricky watching reruns of Full House in Eric the Hedgehog's apartment, when a siren goes off outside! He sticks his head out the window to see dark spirits and robots ravaging the city! He decides that it's time to finally show the Emperor of Dark Spirits who's boss! Eric comes along saying that Metal Eric is in cahoots with the demon, and is the reason why there are robots. Mighty and Warp decide to come along to help Ricky since he's a friend of Eric. Fuzzy and Cloud, two hedgehogs who have a vendetta against the Dark Spirits, tag along. But before they can get too excited, Ricky knows that he must first visit the Kaonashi Monks to see if he and his companions are strong enough to take down the Emperor!

The training level. The Monks give Ricky, Eric, Mighty, Warp, Fuzzy, and Cloud a few lessons in combat.

You return to the city to take down the Dark Spirits and the robots. Hazards include Egg-Bombs, mines, falling debris, Dark Spirits, and Robots.

You meet up with Egg-Robo, who decides to take you on. Weaknesses: Eric's Super Peel Out, and Ricky's Ninja Stars.

The explosion from the battle launches you into a jungle. Hazards include Carnivorous Plants, Quicksand, Poison Barbs, Dark Spirits, and Robots.

You arrive at the ruined city of Tanga-Tanga-Ting-Tang to fight the Quill Troll. This Dark Spirit has a bunch of quills which come in handy for either sticking you or attracting Lightning. Weaknesses: Mighty's Lightning Strike and Ricky's Katana.

You now leave the jungle and find yourself in a hot, hot desert. Hazards include Giant Sidewinders, Pitfalls, Jackals, Dark Spirits, and Robots.

You arrive at an oasis in the desert to fight Flame Jackal. This creature is a Dark Spirit/Robot Hybrid who takes on the appearance of a Jackal who can launch fire. Weaknesses: Warp's Fast Reaction and Ricky's Nunchaku.

You arrive at the Dark Pit in the Desert, which is underneath a supernatural storm. Hazards include Micro-Black Holes, Char-Lizards, Laser-Cannons, Dark Spirits, and Robots.

So Much More - Bentley Jones (Theme of Eric)

Endless Possibility- Jaret Reddick (the theme of Mighty and Warp) 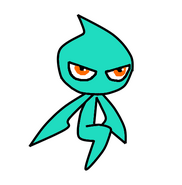 The Emperor of Dark Spirits 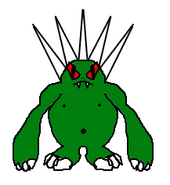 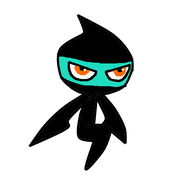 Ninja Ricky
Add a photo to this gallery

1. How The Three Stooges once called an orangutan: Orangutanga-tanga-ting. 2.The chorus line from the song "Witch Doctor": Ooh Ee, Ooh Ah Ah, Ting Tang, Walla Walla Bing Bang. (also the inclusion of gray langurs in this game refers to a part from "The Rugrats Movie" in which there was a scene where escaped circus monkeys dance around to a monkey-oriented version of Witch Doctor)

Retrieved from "https://sonicfanon.fandom.com/wiki/Ricky_the_Wisp:_Dark_Spirits_Unleashed?oldid=925650"
Community content is available under CC-BY-SA unless otherwise noted.