Anyone rival or evil.

"I am the person of the future that will decide who he will be,I am the person who wins over evils powers,being my father couldnt stop me being a hero and it won't stop me now! Because I'm Rick the hedgehog,and you? You will be one of the others that will gaze my power! "-Rick says in fight with mephilies

Rick the hedgehog(ハリネズミの厳しさ Harinezumi no kibishi-sa) is a antimorphic grey hedgehog that lives on Mobius and hero guardian of Mobius and earth.

Rick is a antimorphic grey hedgehog that lives on Mobius.He is a young,cocky,bit of a showing off personality of a guy.Just like sonic,he sometimes doesn't have a care in the world to haters, but as serious when it comes to people he admires getting killed,similar to shadow.he is quick on his feet and a sore winner sometimes,especially in allstars racing.

He was born and grew up with a Rich family in a wealthy city, he lived free of trouble until he was about 6 years old, but at that point life changed.

He lost his parents when they left after an invasion and was headed for a life of misery. Without any help he had to survive in a bitter world. But with his diligence and persistance, he managed to train to perfection and conquer all fears and doubts. This has turned him into the man he is today.

Having finally found some peace of mind, he now works as a student and and a hero of Mobius. By doing so, he hopes to find answers to the events of the past and finally find happiness he has never had.this had created him to be a member of team sonic. But when realizing his father almost cursed him to destroy the universe with the power that he had but didn't turn evil when the Invasion threw him and hit his head severely, which turned him good as an infant.he got his allegiance to be 100% Hero.so with the challenges he faces with the team and outside,he can make it far more than what expected.Years later,he turned 11,he had to find a middle school,and knuckles was too dumb, tails was going to be his homeschool college teacher,and sonic was all about adventure. He had no where to go, until he got adopted by his dad's brother,silver the hedgehog with his wife,blaze the cat. Silver even taught him how to do the impossible !when going to highschool,he met a girl named Carmen.she is one of Amy's friends' daughter. This Explains the reason why Rick has a large love life too. sometimes,Rick looses track over homework and missions when Carmen and her friends gang up to marry him.he tried to go to a village where another mission tooked place. as he went to help,they came to kidnap him and force:marriage or death. His tounge slipped making him say "death" and they attempted to kill him. soon as they moved, a teenaged hedgehog named Holly the hedgehog Came and helped him out and escape.

When reaching 14,he felt uncomfortable for team sonic to just randomly say "no" when it comes to big missions around the country,so he decided to create a team with people he knew,Holly the hedgehog,Jessica the bat,and Brody the fox along with his pet chao,tren The chaos chao.together they created a team sonic/team dark type team,now recognized as "team Rick".

But then he realized:his father is a type of hell being,so he can comeback to destroy mobius anytime.But to make sure that doesn't happen,he trapped him there and kept him in a isolated prison impossible for the average mobian to get out.but the day that graduated Harvard junior high and in his ceremony,he came back with his mobs trying to destroy the universe! But team Rick and team sonic teamed up to fight the mobs while Rick was gone. After mephilies killed Holly,uncle silver and the others, Rick came and fought with him.With this,Rick almost drowned in one of earth's biggest waterfall. Yet this fight destroyed earth and all of its people because of a plasma destruction blast mephilies made.but this is when Rick noticed mobians live there too, so at that rage point, Rick turned to the transformation of super mobian Rick.yet killing mephilies and locking him in the demolished earth's hell.With the earth explosion problem,he used creation before destruction,a move learned from silver,to bring back earth and its people.

When back on mobius,earth promised to get a award for the young hero.after that,life just became normal again.and the June they finished the high school he was attending,Rick asked holly to be his girlfriend and for Brody to come to his graduation party. Though going, a drilling underground came and Carmen was there with 99% of her body robotic.he asked why is her body mechanic and she answered that she heard what he did and when he learned the chaos bash move,she was able to harness that energy to create shadow andriods, a powerful android army.this problem wasnt small enough to bring 2 teams to help. So they called team dark.rick nearly killed shadow for trying to kill him.but the fight payed off for shadow to agree to sign with a triple team.but the final android black killed the team except Rick! His power became so high,he tapped into a legend's energy and had super mobian sega mode and finished him with a pounding to the chest.afterwards Rick helped the guys by bringing them to the hospital.

A few days later, tails made a way to fix the problem with the online virus that came into the entire planet. An android that could be used for good. But the fiendish EggMan had other plans.hacking into the project, he made 8 different clones he called the ASP, meaning:

They caused destruction in the world and chaos. With that in hand, Rick taught shadow and sonic to get the sega mobian full power transformation and they destroyed the projects except a the main priority:Asp8, the final android and strongest.yet lost charge and turned normal.with that situation fixed,they had to keep asp for a brother living with Rick.

after that happened,months had been perfect for everyone. Even shadow seemed happier when this ended. But that was just the tip of the iceberg. one of his father's servants stabbed Rick with a knife in a fight. Before that servant committed suicide, he gave Rick some to know... That other Mobian-black arms are coming to get them too. Blaze the cat, Rick's aunt, went to get a life pack for him,yet taking her a month, plus, the results were longer than they expected,but he lived. Then, the two guest came: Echo the echidna and the grandson of black doom, prince kevin the Hedgehog. The technology they were using was so new to Rick and the others, yet rick was still able to stop Echo... Kyron(Kevin)and rigorru (Rick)growned so tired from their fight and decided to just team up.

now he is a technology maker for Togoya phones,tablets,and laptops. But It won't affect him being a hero.

Spindash:curls into ball and hits multiple enemies with incredible amounts of speed

Chaos bash:similar to a chaos blast x10,but with a dragon aura appearing too.mixed with a similar electric Kamehameha.

chaos sneeze:this sneeze can pull chaos energy and can blow up the opponent,yet being very dangerous if blowing up a powerful object,like a emerald

Creation before destruction: the power to create anything or fix it

Destruction before creation:the power to destroy a planet and a sun(unable to destroy Earth or Mobius' sun or planet)

Rick achieves this powerful transformation in a rage after Mephilies kills Katie and silver . Mephilies had destroyed the mobians out of his fear of their growing power and the idea of a possible Super mobian. As a result of defeating mephilies, Rick avenges both the mobian race and the death of his best friend holly and silver.

After his fight with the God, Sega, rick realizes that fully mastering his Super chaos form would cause it to eventually raise his level more than Super mobian 2 and Super mobian 3, and sap less of his strength.

While in his Super mobian form, Rick is able to take on a further enhancement of the form known as "sega Mode", in this state he learns a new technique called the planet chaos bash.

in the black shadow android saga, Final black came and nearly pummeled Rick to his death,he became overpowered by his anger while he couldn't do anything to save his friends, he felt a tap from a great fighter he will wo with later named sega and turned to a red covered super mobian named super mobian sega and with that,he defeated the monster and saved his friends by going back in time.

after seeing that he was a mystery Emerald himself,Rick took charge and had to find the causes for this chaos.but it was a lure when all of his rivals came and worked tog ether her to make him werehog.

Somehow, the Ray gun had no affect of turning him into a monster,but similar to the super form transformation, his Werehog body turned gold and he had the power of a werehog and himself.

Amnesia:after battles that hits his head too hard

feelings:if someone is hurt or dead,or reminds him of his tragic past

Super mobian Rick: Roses are red. Your blood is too. You look like a monkey And belong in a zoo. Do not worry, I'll be there too. Not in the cage, But laughing at you.

Chaos where hog:Your birth certificate is an apology letter from the condom factory.

"I'm glad to see you're not letting your education get in the way of your ignorance. "

-Rick telling Mephilies before mephilies' send off to be isolated

"Two wrongs don't make a right, take your guardians as an example. "

"Hey egg breath, before you try taking me on, how about you shave that ugly mustache before I spindash and get your nose hair lice on me,and pu-lease ,before you run up to rule the world, you should try to run on a treadmill."

i won't rest until you lay dead on my feet

His #1 and only best racing car:the F1 Roxy

Tittle in start of games or in his logo

A fight with shadow in a World Cup fight stadium

After battle,Rick is having amnesia

Brody and Rick meeting each other for the first time,then starting to be friends 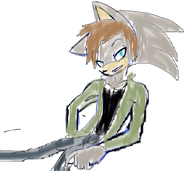 A painting of Rick
Add a photo to this gallery
Retrieved from "https://sonicfanon.fandom.com/wiki/Rick_the_hedgehog?oldid=1837248"
Community content is available under CC-BY-SA unless otherwise noted.