Start a Wiki
This is an article about Richard "Roulette" the Cockroach, a character created by JokerJay779 on 10/7/2014.
Richard the Cockroach 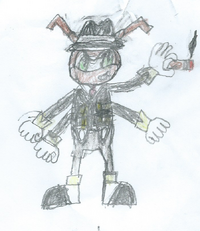 He is very greedy and would do anything to get money. He thinks very highly with himself as he believes without him there would be no Eggman Empire in the first place since he makes the funds for it. The reason he doesn't use any of his vast wealth to give to Eggman is because he doesn't want to lose any of it so he hires goons to get the money through less legal methods. When his men do a good job he praises for it but when they do badly however he has Ripper punish them. While acting as a good citizen his personality is vastly different much like an eccentric billonarie.

He was once a butler to a CEO of a large company until he poisoned him and took the inheritance. Ever since Richard got the company he have been using his money to hire thugs to get more money through illegal means. One day Richard was gambling at Eggman's Casino Night Zone and met Eggman there. Eggman and Richard made a deal.Richard would help fund the Egg Empire and the Eggman Empire then gives Richard weapons,robots,and a seat of power in the Eggman Empire in return.

Roulette has incredible speed. While this speed can't be able to compare to the likes of Sonic or Shadow its still pretty quick. He has can be able to fly with the wings hidden in his back.

Roulette has a excellent marksmanship. He has four guns and he knows how to use them well. He usually never misses his targets.

Retrieved from "https://sonicfanon.fandom.com/wiki/Richard_%22Roulette%22_the_Cockroach?oldid=1823844"
Community content is available under CC-BY-SA unless otherwise noted.