Start a Wiki
This is an article about Ricardo the Wolf, a character created by Darkest Shadow on 9/12/2014.

Paliside Town needs a person fast and strong enough to protect an entire town from danger. That's where I come in. I just need to stop criminals from doing the wrong things. Thanks to my old father's awful physical and verbal abuse, I think I'm ready for any possible contingency. No need to worry when you have someone like me to have your back. 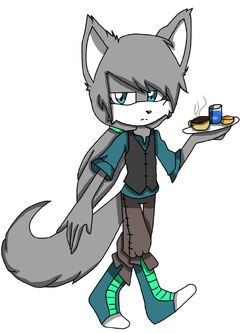 Ricardo the Wolf is a fan character adopted by Darkest Shadow. He is a boy from Palisde Town, who is a hero of their town. He also happens to be a waiter at a local outdoor restaurant.

Ricardo Caesper Fernandez is a 20-year-old wolf from Paliside Town. He is the famed crime-fighter of Paliside Town and a waiter at a local outdoor restaurant in the town square. When he's on break, off, or not fighting crime. Ricardo just hangs out on the town square. However, he also trains to test his speed, agility, and strength.

While Ricardo is working as a waiter, he is the favorite of all the customers and frequently wins employee of the month. He always writes down the customers' orders in a harndwritting everyone can read. He actually loves his job just as much as they love him.

Ricardo is very independent. When he fights crime, he prefers to do this on his own, with not much, if not, not any help from friends. However, despite his independece, he makes a good leader and leads other people to their goals. He shows true leadership in the way he talks, the way he fights, and his thoughts. Most people find him a very great leader and bright things will happen in his future.

Being a heroic figure, Ricardo is gallant and hardworking. He shows this by pushing his limits and attempting to do some of the challenges his enemies have to offer. He trains hard to defeat all enemies. He also doesn't back away from a fight.

RIcardo happens to also be calm and collected. His voice is deeper than usual and always tries to relax when he can. He also doesn't really cause the trouble, but he breaks it up, and like a true hero, fights it up when he has to.

Ricardo currently stands at a good height of 3 feet and 9 inches tall and weighs 90 lbs. His fur color is a lighter shade of grey, and matches his hair. His hair is long and shaggy, it goes down to his shoulders. Some of his front hair covers up part of his left eye. His eyes are rather short and are two seprate eyes. His pupils are a greyish blue lke a stormy sky. His muzzle is white and furry with three points on the ends. His ears are big and also shaggy. His innerears are also white as well. His tail is also long and bushy.

Ricardo wears a teal half button down shirt with a collar that is up. His sleeves are also rolled up. Over it, he also wears a black vest that is somewhat shorter than his actual shirt. For botoms, he wears brownish-grey cargo pants that are stiched and rolled up. For shoes, he wears teal boots with a minty green spot in the middle to tighten them, with white tips. Also, his hair is tied up in a ponytail with a minty green hair barrette.

My Sweet Life: Escape From the Paparazzi- In this game, Ricardo is one of the eight main playable characters in the game. He has been chased down to the point where he is lost and must find her way back home. Along with this, He needs to avoid the fanbrats, media and most of all, the paparazzi. He amazing powers, and a good skillset in the game.

Cooking- Ricardo is very good at cooking. Working at his local restaurant, he isn't only a waiter. He also is a good frycook. Some say that he makes the best burgers in Paliside Town, and when he makes anything else. It's also pretty good. He has been working the grill for a few years, and has already became great at using it!

Acrobatics- Ricardo is skilled with highly incredible acrobatic skills, that allow him to jump in the air and sometimes even perform a few acrobatic stunts. This also allows him to jump highly and gracefully into the air and stick his landing. Even though he doesn't take classes in acrobatics, or even get tutored by a well known expert, his skills are superior. Coming along with his acrobatic skills, his balance is also pretty good, as he can balance himself onto thin beams and rails, and grind on them with ease.

Enhanced Speed- Ricardo is pretty fast for a wolf. With all his constant training, he usually tests his speed to see how fast he is. Everyday, his speed grows, and it goes to the point where it is impeccible. Currently, Ricardo reached speeds as fast as 100 mph. With his speed comes reflexes and agility. He is able to dodge attacks easily, which can sometimes get annoying for the criminal he is fighting. His agility is also pretty great, allowing Ricardo to dodge, jump over, slide under and sometimes even break through obstacles.

Enhanced Vision- Ricardo happens to have been born with excellent vision. He can see from far distances, and doesn't have trouble with his far or near sight vision.

Enhanced Smell- Being a wolf, like most of them, Ricardo has a pretty good sense of smell. When Ricardo is crime fighting, being a hero, or defeating a villain, this comes in handy to track down a villain with a more familiar scent. This makes him seem like a map in the form of a wolf!

When Ricardo isn't crime fighting etc. etc., his enhanced comes in handy for his job during his everyday life. He is able to smell food from a mile away to see if it's ready.

Attack: 8- Ricardo is a great fighter, and really shows off his strength.

Defense: 7- Although it needs some work, Ricardo's defense is great.

Evasion: 8- It's easy for Ricardo to avoid attacks.

Intelligence: 9- Ricardo's pretty clever when it comes up to plans, and seems to come up with great ideas.

Skills: 9.5- Being trained in a camp for a few years, he is pretty skillful with a weapon and a spatula!

Stamina: 8- With all the speed, he rarely doesn't get out of breath.

This character's fourstat code is 6766