Voted Best Female Runner-Up for Summer 2017!
This is an article about Rhyna the Echidna, a fan-character created by Julia Finitevus!

I'm a pirate, not a civilian! My name is Captain Rhyna! Now where's my rum?! Hey... HEY! Where in Enerjak's name is my rum?!

(Special thanks goes to my friend XophPsycho for picking out the name for this character. Thanks Xoph! :) I also thank Flashfire212 for allowing me to use the Starsword for my character.) 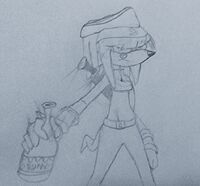 Rhyna is a female Echidna pirate captain born two thousand years after the Genesis Series takes place. She will make her first appearance in the upcoming "Rhyna the Echidna: Dark Flames" series. She is currently being trained by Nyota, a.k.a. "The Khan"(the person who trains the future Guardians), who also happens to have most of her ancestors' memories and is also learning Japanese (or the Mobian variant) martial arts.

Rhyna can be described as the type of pirate who has a sailor's mouth and judgment being usually impaired by rum. Rhyna can also be described as confusing, as she can sometimes be seen talking to herself about nonsensical things. She considers herself a part of the sea and space rather than land, yet she can frequently be seen either in a bar or escaping from execution by the authorities. She also has an odd affinity for the colour black.

She can be a fun loving person and will sometimes act a bit childish when it comes to humour. However, if her friends are in danger, she can become extremely aggressive and will gladly kill anyone who harms her friends.

Rhyna also doesn't take well at all at being treated as a damsel in distress. Anyone who treats her that way usually gets a fist in the face from her. Rhyna doesn't like to listen either; when someone tells her to do one thing, she goes right ahead and does another.

Rhyna can be somewhat egomaniacal as well, and doesn't take well to being insulted. She can become angry very easily when anyone tries to do so and will gladly hit them if they go too far.

Rhyna also is antisocial and doesn't like to talk to others. She hates society as well and refuses to be a part of it. Rhyna is also completely open about her loathing of society. She also has a horrible temper and will frequently be seen screaming and shouting at someone, especially the first mate Monty J. T. Vao.

Rhyna is a professional swordswoman, and can disarm her opponents with ease. She also has an unusual aptitude for technology and can build most machines very well. She also is able to quickly code complex programs and can hack into certain types of computer systems quickly.

Rhyna also is a skilled navigator and has quite a few areas mapped out in her head in significant detail. She prefers maps and a compass over computers, possibly why she is mostly independent in navigation.

Rhyna has a few weaknesses as well. One is her claustrophobia. She will do whatever possible to stay away from tight spaces, and she can be seen paralyzed with terror if caught in a tight space.

She also has a slight limp in her right leg (due to an old injury of unknown circumstances) and so she is not as quick on her feet as she could be without the limp.

Rhyna also hates most technology (except for her ship the Dark Flame, which she loves dearly) meaning that she usually won't use it. This can put her friends in danger if technology is required in certain situations.

Another weakness is that Rhyna is often times quite drunk, which can significantly impair her fighting and navigation abilities.

Rhyna's origins are almost entirely unknown to many people, including herself, though she has somewhat vauge memories of living in a large house with many people. She recalls one day there being a much noise, and then being taken from that house, never to see it again. Rhyna was later sold for a profit, though she is unable to recall to whom.  Rhyna somehow escaped at age six and has been on the run ever since.

Rhyna at age thirteen had briefly been integrated into the original crew of the Dark Flame. The captain was very cruel and unjust towards his crew, especially towards Rhyna. Rhyna eventually got to the point where she couldn't stand the abuse any longer and started plotting a mutiny. She eventually gained the backing of the crew and as a result overthrew the captain. From that day forward, Rhyna was the captain of the Dark Flame.

At some point she had rescued Antonio Terrè from being executed because of a lie and eventually also rescued Monty, who was in a similar situation.

Rhyna is a female Echidna with golden fur and orange eyes with noticeable lines in her eyes. Her bangs are golden coloured as well. She typically wears a navy blue long-sleeved jacket over a black turtleneck and black pants with grey trim at the ankles. She wears silvery grey fingerless gloves on both hands and black boots with golden trim. She also wears a turquoise coloured bandana with a teal crescent moon symbol on it, as well as a sword scabbard-which carries a Starsword- on her back. Rhyna can also frequently be seen wearing a hat, which she constantly loses during fights or escaping from the authorities.

"Get back to work, you miserable idiot!" - Rhyna reprimanding a crew member

"Eh? Who're you again?" - One of Rhyna's catchphrases

"Montgomery Vao! Stop gobbling in fear like a turkey and help me diffuse this bomb!" - Rhyna, very much frustrated

"Ech, take it somewhere else, will you?" - Another one of Rhyna's catchphrases

Rhyna's main theme is Shake it Out by Florence and the Machine.

(Notice: This may change at some point!)

(Soon to be added)

Rhyna without her pirate hat
Add a photo to this gallery
Retrieved from "https://sonicfanon.fandom.com/wiki/Rhyna_the_Echidna?oldid=1838528"
Community content is available under CC-BY-SA unless otherwise noted.