Agent M.G. reporting... What is my next mission?

Now, Rhianna is a black hedgehog with purple in certian spots. She wears a blue dress with "Fish Net" tights. She wears red sneakers that can transform into rollor blades. Rhianna also has chest fur and fangs.

Dr.Eggman (the age of 25 at the time) decided to finally show Shadow his sister, which Shadow didn't belive was true. Eggman let Shadow into the labrotory; leaving Shadow in the room by himself, expecting him to be disciplined. After leaving, Shadow took a quick glance around and then set his eyes on Rhianna, like a stone statue in water. Shadow didn't want to see this anymore so he clicked on release. That is the exact time Eggman came in. Eggman screamed and yelled at Shadow. Rhianna had no idea what was going on because she wasn't taught anything. She figured it was an arguement and used Chaos Spear which at the moment she had a high level of Chaos Energy. So the whole place exploded. Everyone in the Lab House at the time was proclaimed "dead". The exact place is now a ruin.

Rhianna is has a very playful character. She likes imatating other people, especially Shadow. She can act serious at times but that status is pretty rare for her.

Rhianna also likes to have alot of fun. What she considers that is scaring people by changing her height.

She seems to be a shy person. When she is put in a room with someone she doesn't know (or haven't met them in person) she will stay quiet and still as a statue.

"Something's missing in this picture...YOUR FEAR!" One of the things she says before she scares someone.

" 'Who am I?' you ask. I am Shadow's sister, the much more adveanced of Eggmans creations! And if you wish to know more, come and follow.."

"I was sent here for my own dutys. Why? Because your face bothers some people." Making fun of Amy

"See ya!" Passes A racer

"No fair!" Being passed.

"Alright! Lets do this!" When she gets the Attack power 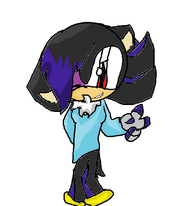 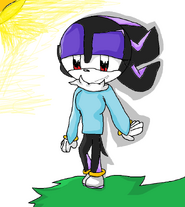 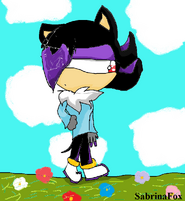 Rhianna's Secondary Look
Add a photo to this gallery
Retrieved from "https://sonicfanon.fandom.com/wiki/Rhianna_the_2nd_Ultimate_Lifeform?oldid=1800025"
Community content is available under CC-BY-SA unless otherwise noted.