— Rex giving himself a last name, The Heart of a Warrior and Rising Courage

Rex Storm is a young brown Wolf based on the Wolf Avatar. He makes his debut in The Heart of a Warrior. Initially a Resistance member, he joins the Storm Fighters as a warrior after the Great Rebellion. He has an older brother named Stan and is close friends with Pebble the Lycanroc and Streak the Bird. He is the main protagonist and the POV of The Rising Darkness, and will be the protagonist of Rising Courage, a retelling of the events of both Sonic Forces and The Heart of a Warrior from his perspective. He also has a crush on Tammy the Wolf 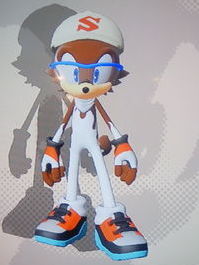 Unlike most other Mobians seen in The Legend of Fox the Brave, Rex isn't designed to be realistic. This is because he is based off of the Avatar from Sonic Forces. Rex is a male Wolf Avatar with brown fur, blue eyes, and a white flame pattern on his pelt. He wears fingerless white gloves with a red streak on them, mostly matching sneakers, a beige cap with a red design on it, white camo neckerchief, a black Mega-com(wrist-com upgraded with a Key Stone) on his right wrist, and a grapple wire device modified to also serve as a Z-Ring on his left.

Similar to Alex the Jackal, Rex is friendly, slightly childish, and very eager. Like all wolves, Rex is fiercely loyal to those who earn his trust. He does, however hold a fierce grudge against Infinite for the murder of his patrol and the disappearance of his brother Stan early into the Great Rebellion. Rex is close friends with Pebble the Lycanroc and the human Simon Komm, and is close to his older brother Stan.

Before the Series: Rex was born and raised in an unnamed city(the setting of the City Stages), to a gray Wolf named Wilson and his unnamed wife alongside his older brother Stan. When the Great Rebellion began, Rex eagerly joined the Resistance, while Stan hangs back. Things changed when Infinite attacked his patrol, however...

The Heart of a Warrior: Rex first appears in Kidnapped Puppy, though initially unnamed. Rex is scared off by Infinite, and trips during his attempt to escape. In the next Chapter, Rex is brought along as the remaining warriors head out of the city. Crying out for Stan, Rex tries to rush off to find his brother, but is knocked out when Fang knocks him on the head. He is brought to the Storm Fighters' temporary camp, where he recovers fully from the huge saber's blow. Rex asks if anyone's seen his brother, but no one has. When the warriors begin brainstorming how to get Pebble back, Rex helpfully states that Eggman keeps his prisoners aboard the Death Egg. The next day, it's stated that Rex was kept overnight to recover from the shock of his patrolmates' murders and his brother's disappearance and possible death. As the warriors prepare to leave, Austin offers Rex a chance to join the Storm Fighters, but he turns it down. Rex promises to think about it as he turns to leave. Later, after Pebble flees the Mystic Jungle camp after the warriors are captured, he runs into Rex, now sporting his current clothes. Rex carries a frightened and crying Pebble to the Resistance, where they learn of the Fighters' plight. Rex goes along with Knuckles' squad to try to rescue the Storm Fighters, but is captured with them, freezing up completely when he sees Infinite. Rex is later rescued himself when Pebble evolves in a fight with Infinite and wins, giving the keys to Austin, who unlocks all the cells holding the warriors and Resistance members. When Knuckles's squad stays the night in the Storm Fighters' camp before the final battle of the Great Rebellion, Rex and Pebble talk together about their apprehension and shared fear of Infinite. During the fight, Rex makes the false sun created by Infinite disappear using a Phantom Ruby prototype he found in Mystic Jungle, before joining the fight himself. While Austin battles Infinite, Rex joins Modern and Classic Sonic to fight off the Death Egg Robot. When the fight it won, Rex decides to join the Storm Fighters, and Austin conducts an official ceremony(as his very last act as leader before handing the position back to Fox) after officially pardoning Shadow the Hedgehog and banishing Dr. Finitevus from all Alliance territories.

Rex and Stan are very close to each other, to the point that Rex was determined to find his older brother after Stan vanished when Infinite attacked their city. Even after the reveal of Stan's deal with Infinite, the two maintain a close bond.

Rex befriended Pebble during the Great Rebellion, comforting the young Rockruff after he fled from the captured Mystic Jungle camp. Before the final battle in the Great Rebellion, Rex and Pebble both found solace in each other after relating their shared traumatic experiences with Infinite.

Infinite attacked Rex's patrol, killing everyone but sparing him out of sadism. Rex has since been traumatized by this, admitting to having nightmares in which he witnessed Stan die during the attack. Because of this, after overcoming his fear, Rex now harbors a deep-seated grudge. This was worsened when Rex found a camcorder with video logs from his late father Wilson, showing Infinite killing him when the pale-furred wolf refused to work for Eggman any further(before Sonic's imprisonment)

At an unknown point in time between the Great Storm and the Lamarkie Standoff, Rex and Tammy developed a crush on each other, and grew close. Following the Standoff, Tammy joined the Storm Fighters to be with him, with Digger the Dog taking her place as second-in-command of the Lamarkie Defense Force.

Rex was traumatized by Infinite, and often froze up whenever he encountered him. He has since overcome this, but Infinite took advantage of Rex's fear, cruelly taunting him, especially when the Resistance was captured aboard the Death Egg. 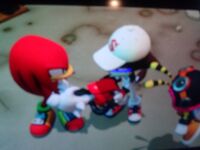 With Knuckles in the Resistance Base 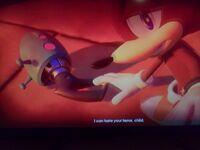 Rex tries to grab a blaster 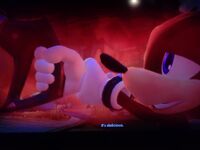 Scared out of his wits, Rex tries to fight back 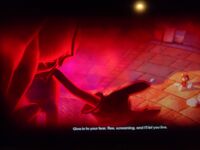 Infinite lets him flee with his life 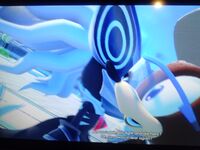 Being confronted by Infinite 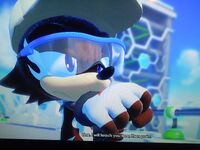 Gathering his courage to fight

Rex is an entirely original character, but his brother Stan is based off of "Stares the Abyss", a wide-eyed dark gray Wolf from the BrainScratchComms' Sonic Forces LP.

Rex and Stan's father Wilson was recently added to the series as a back story concept for Rex.

Following the murder of his patrolmates during the Great Rebellion, Rex suffered from PTSD until he overcame this in the as of yet unnamed sequel to The Rising Darkness. Afterward, he still suffers from it, but it isn't as bad.

It was revealed in The Lone Wanderer that Rex and Stan are descended from the Wandering Wolf Pack, as their father left to pursue a different life.

Retrieved from "https://sonicfanon.fandom.com/wiki/Rex_Storm?oldid=1823036"
Community content is available under CC-BY-SA unless otherwise noted.