Renée the 'Cosmic' Caolf is an elven angel from the planet Altharia. Because of her addiction to Arcane and Frost magic, it changed her appearance. She is very skilled in both of these. She always welcomes friends, and hopes to find her chosen one.

Cheerful, outgoing and kind, Renée is a great friend to have. She is also very loyal to her friends, will listen to their advice and protect them. For someone her power, she never gloats.thumb|212px|right|Perfect Girl - Kim Wilde

Renée is a white caolf, with arcane markings on her fur. She posesses silver-blue eyes, and her hair reaches below her thighs. Her hair is mostly straight, but wavy in the rain, and it has black highlights.

After suffering a brutal attack from the Shade Union's leader, Damien, Renée was left in a forest to die. She was holding on to the life she had, untill she came across a hedgecat who was a doctor. He helped her back to health and he introduced himself, Phaaze the Hedgecat. She began to respect him, for the amount of care he had for her. She let it slip that she liked him, but was soon told by Phaaze that he had just came out of a relationship. He paniced, and Renée tried to calm him down. When he had a nightmare, Phaaze went to stay away from her for her own protection. Renée took this the wrong way and thought he didn't want to be with her. He realises he wanted to be with her, despite what he dreamed and looked for her. They met and shortly encountered Damien. When Renée had told Phaaze about him, he protected her. Unfortunatly, she was hit by Phazon and was almost corrupted, if it wasn't for Phaaze saving her.

She is advanced in the powers of the arcane and frost. Arcane magic is basicly magic that absorbs power of the evironment and time-space, causing it to rip through the fabric of the universe itself if not used properly.﻿

Because of her abilities to copy things that she knows, she can use the image of a jellyfish to create a form similiar. This form has a long, billowing dress, her fur is light orange, her eyes go crystal blue and her electrical powers are highly advanced. She is also able to swim well. ﻿

Phaaze first encountered Renée when he was walking through the forest, finding her injured, he tended her wounds. After a breif kiss, he fell in love with her, but he just got out of a relationship with someone and was unsure about it. After a nightmare he had about his preavous life, he felt the need to protect her from himself and left, thinking he won't find love again. Once he reached his car, he realized that even if the nightmare was real, he will still love her, so he rushed back to find her and confess his love to her. 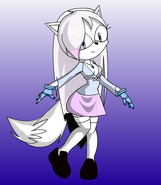 Renée (Sonic Charrie Maker)
Add a photo to this gallery
﻿

Retrieved from "https://sonicfanon.fandom.com/wiki/Ren%C3%A9e_the_Cosmic_Caolf?oldid=1552570"
Community content is available under CC-BY-SA unless otherwise noted.