Start a Wiki
This is an article about Reeves the Hyena, a character created by Dynamite Bean on 08/05/2018. 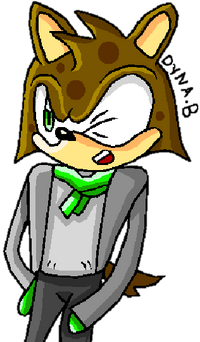 Reeves the Hyena is a hyena who likes to dress very in a very formal matter. His fur is a chocolate-brown color, with dark-brown circles mostly on his head. His tan and his ears are a tanned color, similar to Sonic the Hedgehog's colors. His eyes are an emerald green, which seem to glimmer on sunny days. Because of this, he likes to wear green. He normally wears his 'lucky' scarf, which is an emerald green and wraps around his neck. He also has a pair of matching mittens! He wears a grey long-sleeved jacket, which he is very rarely ever seen without. He wears a lighter grey shirt underneath, which he always tucks into his trousers. His shoes are a dark green with red highlights going through the green. He has a British accent when he speaks, which he always gets teased for.

Reeves is that kind of guy who you know will always have your back. What he lacks in power, he has in intelligence and loyalty. He has been brought up in a respective matter, and is very well mannered. Despite all this, all he hopes for is to defeat Eggman, get a wife and spend the rest of his life in a small cabin on the coast of Seaside Hill. However, his love-life is terrible. He got his first girlfriend when he was 12, and they broke up shortly after. He has then had four other girlfriends, making it five girlfriends in total. He tries to dress as formal as he can to try and get a girlfriend he'll love forever, but it's not every day you see a Mobian Hyena in scarf and mittens.  In his free time, when not adventuring, trying to earn money or trying to find Sonic, he enjoys listening to music. He prefers rock over any other genre, and it calms him when he listens to it. He also trains with his spear, which he's named 'Grim'.

No one knows where he was born, even Reeves doesn't know the name. He explains it as a lush oasis kind-of place, where there were about 25 houses surrounding a huge lake in the middle of nowhere. Growing up there, he was a normal child. He used to collect rocks, and name them after his favorite singers. However, he had this one special rock, which was red unlike the other grey ones. He named this one after idol, Sonic the Hedgehog. One of the things he hated, was how he grew up in a poor matter. He had to walk for an hour to the town twice a week, and sell food his family had made. He'd then use this money to buy items to eat for the new few days, and to make to sell at the town.

When he was 8, he was coming back from the town one day to discover Eggman was attacking. He instantly ran to his house, but couldn't find his family anywhere. He grabbed 5 of his rocks, and ran as fast as he could. He arrived at the town unharmed, but didn't see any of his family there.

From that point, he's sworn revenge on Eggman for what they did to his family. He had to sell 4 out of his 5 rocks for food, but he's always held onto his Sonic rock. He has travelled across Mobius to team up with Sonic the Hedgehog, but still hasn't found him... yet.

Although Reeves is powerless, he does have one ability. He can see extremely well in the dark, which makes him think it'd be better to attack Eggman on a night. He can also seem to be able to jump really high, but Reeves views it more as a skill then an ability.

Reeves' main weapon is his spear 'Grim', which he made himself out of rocks. It is quite heavy, but extremely effective.

Retrieved from "https://sonicfanon.fandom.com/wiki/Reeves_the_Hyena?oldid=1829850"
Community content is available under CC-BY-SA unless otherwise noted.