This is an article about Lady (Dame) Agravaine, a character created by ReensRedux  and co-owned with XophPsycho.

I am not afraid to die for those I love. Dying is leaving for a season.Yes, there will be mourning, but it will not last forever. I will return. Even if my body dies, my hope will never perish. 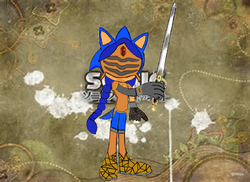 King Arthur (to an extent)

Lady Agravaine is a young female knight who was the first in the kingdom of Aildae. After the destruction of her kingdom by the impostor King Arthur and his Knights of the Underworld, she was taken in as an apprentice by the Knights of the Round Table. Now, she aspires to train hard and earn the mark of a true knight. She still has a long way to go in following their footsteps, but she knows it will come with time.

In civilian clothing, Agravaine wears a blue tunic with grey trim, wide brown pants, and brown boots with steel toes. In armor, her breastplate is copper-colored with gold accents, along with lower armor plating. She places gold plating with red gems over her boots for added strength. As for her helmet, it has three open spaces in the front with a red jewel on the forehead. All of her armor has her father's thin metal plates underneath for added strength and protection.

Obtainment: Agravaine originally didn't own a blade of her own, but used a training weapon given to her by Sir Ascelin. When he and his knight's guild were destroyed, she kept it to protect herself. Shoddily made, the blade snapped when she was fighting King Arthur's Knights of the Underworld. After being rescued by the Knights of the Round Table, Agravaine was allowed to forge a custom sword with the help of a two-tailed blacksmith. She named the new blade Stormbreaker in her father's honor.

Agravaine is known to be very serious when it comes to a task she is undergoing. She cannot deal with failure well, and if she fails her task, she sees herself as inadequate. When she is not on a mission, Agravaine is more laid back and kindhearted. She especially loves to play harmless pranks on her fellow knights and mingle with townsfolk. Her favorite mentor seems to be Percival, as she emphasizes with her sense of honor and duty to King Arthur.

When Agravaine was about eight years old, an annual festival was being held in Aildae. Knights from across the lands attended, including the Knights of the Round Table - and the original King Arthur. She was unable to get a good look at him until he passed by her family's tent. However, Agravaine felt a sense of foreboding in her chest. Was this the true King Arthur?

New Threat and a New King

A few years later, mystic dark forces gathered around Aildae's borders. Still an apprentice, Agravaine tried to warn her elder mentor and father, Sir Ascelin. Unfortunately, the influences had already spread through the town, terrifying the locals and causing them to attack each other. Sir Ascelin told Agravaine to stay behind and help them as his company, including her older brother, rode off to gather reinforcements from across the border. They never returned.

Left alone to protect her people, Agravaine became increasingly overwhelmed by the sheer number of Knights of the Underworld and their leader, Merlina. When everything seemed lost, a blue flash streaked across the battlefield, decimating the soldiers. Merlina and the blue flash, who turned out to be the true King Arthur, took their battle elsewhere as Agravaine looked on.

After Merlina was defeated, King Arthur and his Knights prepared to return to Camelot. Percival was the one who eventually found Agravaine, struggling under a pile of rubble from the previous battle. Percival, with help from Gawain's brute strength, dug her out. In gratitude, Agravaine refilled the Knights' canteens, surprising them. Percival then asked Agravaine to join them as an apprentice, which she accepted.

On the way back to Camelot, the group of Knights visited Lady Nimue. At first, Agravaine was frightened of her, but Nimue calmed her down and explained how she knew who Agravaine was. Gaining Nimue's blessing, Agravaine accompanied the Knights to Camelot, becoming their apprentice.

She remains so at this time, and hopes to eventually become fully knighted.

Agravaine has the ability to control water in any form, including liquid, ice, snow, and vapor. She uses the liquid provided or from the atmosphere. As a last resort, she will use some of the liquid from her own body.

After being born with one arm, Agravaine was gifted with an enchanted piece of armor, replacing her flesh arm. She is able to use it just like a regular arm, with added strength, plasma blasts, and use as a battering ram. It also can absorb a large amount of heat.

Most of Agravaine's powers are derived from the golden heart jewel embedded in her chest. It connects to the necklace she wears, and whenever she uses said powers, her necklace glows. She can still use her powers without her necklace, but it takes her a bit longer to concentrate them. The necklace acts as a focal point.

Agravaine is a moderately fast runner. Her speed comes to about 120 mph depending on the terrain. She runs best in grassy and sandy areas, while snowy and damp areas can slow her down.

Her heart jewel also grants her enhanced strength and agility. She is able to lift heavy objects about 30 lbs heavier than she is and can do some agile stunts.

When Agravaine's positive emotions help her to turn super, she becomes canary yellow with crimson eyes. Her heart necklace becomes silver in this form. Her armor turns pure white with gold trim and a crimson cape. Additionally, her mechanical arm is upgraded and can transform into any weapon that she needs, such as a javelin, extra sword, or ax.

Agravaine will also gain a super form from her negative emotions, but this form is weaker than the White Queen's form. Her armor turns pitch black with a crimson trim and a tattered blue cape. Her gauntlet is upgraded, but at a lesser extent than in her White Queen form.

She also gains the ability to siphon energy from her enemies by literally draining the water from their bodies. It is an ability she uses rarely, if ever, due to its effects.

Agravaine gained much training in the ways of a knight from her father. It included swordsmanship, horse riding, and chivalry. Her training continues with the Knights of the Round Table, with Percival acting as her main mentor.

Along with knight training, Agravaine's father taught her the regular schooling subjects. Agravaine's favorite appeared to be science. Her father let her perform little experiments in their backyard, most of which involved studying animals and plant life. Her mother taught her how to make medicine from these plants and which plants to avoid. She uses these skills in order to create tonics, but still needs practice. Nimue sometimes teaches her how to make them.

Again, though one of Agravaine's greatest powers, it is also one of her greatest weaknesses. Agravaine's heart jewel is essentially the replacement for her flesh heart, and if it were to be removed or damaged, Agravaine would either die or become increasingly unstable/insane. Her heart also keeps her powers in check, and its destruction could send them spiraling out of control.

Considered a minor weakness, Agravaine is unable to read without the letters changing around and 'floating' across the page. Her father tried to help her by making her read constantly, but she still has trouble every once in a while.

Agravaine does not like to be called her full name, as it embarrasses her.

Percival is Agravaine's favorite mentor, with Gawain as a close second and Galahad third.

Agravaine has not used her 'super form' as of yet.

Retrieved from "https://sonicfanon.fandom.com/wiki/Reens_the_Hedgehog/Lady_(Dame)_Agravaine?oldid=1853829"
Community content is available under CC-BY-SA unless otherwise noted.