Hey, you never know what to expect from life. I think it's a good idea to have a lot of fun with it and make a plan later. Take chances, make mistakes, get messy, and dive in! 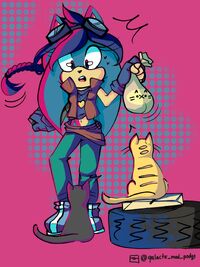 Her appearance is the same as her main counterpart's, though she will occasionally try on an outfit she has created.

Although her personality mostly matches her main counterpart, Reens is slightly more sassy and laid-back. She also tends to get depressed easier if something she does isn't up to her standards.

Her backstory matches her main counterpart's, except for some crucial differences.

Alonzo works in his machine shop that he owns. After Eggman's takeover of the world, he used it as a resistance base. He became so busy with his work that he neglected Reens and Carlos' existence. Her mother felt as if she couldn't take care of them both and kicked Reens out of the house. This is the main reason her grandparents let her move in with them.

She Never Found Her Brother

Eventually, Reens will find her brother in the main continuity. Unfortunately, Carlos was murdered by a rival company to her father's in an act of civil unrest. She has not forgiven them for this and wishes for revenge.

Not technically a power, Reens can use her robotic arm in a variety of ways. She can fire plasma blasts from it and use it as a battering ram. Additionally, it contains a language database and a scanner which can be tuned to the frequencies around her. This is used to scan for potential threats. These abilities were discovered at the age of seven. This power did not come with her golden heart abilities.

Most of Reens' powers are derived from the golden heart jewel embedded in her chest. It connects to the necklace she wears, and whenever she uses said powers, her necklace glows. She can still use her powers without her necklace, but it takes her longer to concentrate them. The necklace acts as a focus point. She had had these powers from a young age but didn't discover them until around the age of five.

Reens is a moderately fast runner. Her speed comes to about 120 mph depending on the terrain. She runs best in grassy and sandy areas, while snowy and damp areas can slow her down. Her shoes have rubber soles which help grip whatever surface she is running on and protect her from electricity on the ground.

Her heart jewel also grants her enhanced strength and agility. She is able to lift heavy objects about 30 lbs heavier than she is and can do some agile stunts, like parkour.

When Reens regularly turns super, she becomes canary yellow with crimson eyes. Her heart necklace becomes silver in this form. Additionally, her robotic arm is upgraded and can transform into any weapon that she needs. Her usual plasma cannon is also upgraded.

Unfortunately, this can also have a negative effect. When Reens' negative emotions (such as depression, anger, fear, or grief) take over, they turn her sea-foam green with grey eyes. Her heart necklace is pitch-black in this form.

Additionally, her speed and strength are multiplied, while her judgement is severely impaired. She will attack anyone she sees as a threat, regardless of being a friend or foe.

She also gains the ability to literally drain the liquid out of her opponents, an ability she uses sparingly.

Since Reens does not regularly use the Chaos Emeralds for transformation, she has to count on her heart energy/life-force. If she uses it for an extended period of time, she will become exhausted and revert. It usually takes anywhere from a few minutes to a few hours for her life-force to replenish. She can still fight in her weakened state, but not very well or for very long.

Reens' father taught her regular school subjects when he could. Reens' favorite appeared to be science. Her father let her perform little experiments in their backyard, most of which involved studying animals and plant life. Her mother taught her how to make medicine from these plants and which plants to avoid. She is currently studying about this further in her spare time. She also attended public high school for a short while to gain a diploma.

Reens started to learn this by helping repair broken machinery. Eventually she went on to the city, where she was trained as a mechanic at her grandfather's shop. Since then, Reens is able to fix almost anything mechanical, but if it is very complicated, she usually relies on her grandfather for help.

Though this power is one of her greatest, it is also one of her greatest weaknesses. It takes almost all of her energy for Reens to control the liquids, and if she loses her focus, it could lead to catastrophe, such as a large tidal wave.

Again, though one of Reens' greatest powers, it is also one of her greatest weaknesses. Reens' heart jewel is essentially the replacement for her flesh heart, and if it were to be removed or damaged, Reens would either die or become increasingly unstable/insane. Her heart keeps her powers in check also, and its destruction could send them spiraling out of control.

Considered a minor weakness, Reens is unable to read without the letters changing around and 'floating' across the page. Her father tries to help her by making her read constantly, but she still has trouble every once in a while. She uses thick-rimmed glasses to correct this.

Though not initially a fashionista, Reens likes to design clothes for her and others to wear. However, she absolutely loathes wearing dresses.

Reens has the same allergies her main counterpart has except for an allergy to cats.

Reens only wears glasses for reading.

She is able to turn super without the use of Chaos Emeralds. She knows what they are, but decides not to use them.

Though born in Eurish, around the UK area, Reens has an American accent due to her parents.

(Let me know if I need to change/add anything!)

Retrieved from "https://sonicfanon.fandom.com/wiki/Reens_the_Hedgehog/Comics?oldid=1853828"
Community content is available under CC-BY-SA unless otherwise noted.