"I'm Rebecca and this is Bonkers, it's very nice to meet you"
—Rebecca

Rebecca had lost her parents when Eggman had taken over her village on the Silent Planet, she was only 3 at the time. She managed to escape when Eggman wasn't looking. Rebecca was then all alone, hiding in a cave trying to survive without food or clean water. About a day later Threetails happened to be walking by at the time and found Rebecca, she then took Rebecca to her house, Rebecca then told Threetails what that happened to her parents, Threetails then felt terrible about what had happened and decided to adopt her, Rebecca was happy about that. About a year later on Rebecca's birthday Threetails got her a chao to be her friend, Rebecca was frilled, she decided to name him Bonkers and the two became really close friends.

She can make huge thunderstorms that are really powerful. She'll sometimes use Bonkers (she'll electrocute him, then throw him at enemies). She can levitate as well. She is also capable of making Electro Blasts. Other then that she doesn't have very many abilities, well she's only 4 and as she gets older she'll develop more powers.

She's a very happy little rabbit, and she gets angry a bit. She also likes calling people family members (Threetails "Mommy" and Shadow "Daddy") alot. She can also be a bit hyper. She is one of the happiest people you could meet, always has a smile on her face. She enjoys playing games, having fun, being with her friends and likes it when Threetails sing. When Threetails sings Rebecca joins in always because it makes herself feel special.

El Dorado the Hedgehog(scares her sometimes)

"Lets go, Bonkers."- When she's on an adventure with Bonkers.

"I'm scared." -when she's scared about something.

"I'm Rebecca and this is Bonkers, it's very nice to meet you." - When introducing herself. 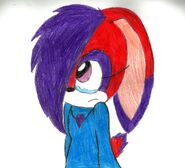 Drawing of her and Bonkers

One of her lines in Crystal and Threetails' Random Shenanigans

Rebecca and Bonkers
Add a photo to this gallery
Retrieved from "https://sonicfanon.fandom.com/wiki/Rebecca_the_Rabbit?oldid=1800020"
Community content is available under CC-BY-SA unless otherwise noted.