Razz the Bat is a 17 year-old music-loving bat. She is sassy and often uses slang. She is also the only back-up member of the Chaotix (and the only female member for that matter). Her height is 3’ 4 and her weight is unknown.

Razz is sassy, outgoing, independent and likable bat. She uses slang and often calls younger girls sweetie and calls her fiancé, Vector the Crocodile, “sugah” (similar to Bunnie Rabbot). She is sometimes careless but her knowledge make up for it. To Melody the Butterfly and Peace the Dove, Razz is their role model.

Razz will fight when she thinks it is necessary. Here are all of her known moves:

She has the ability to fly and can play the violin beautifully. She also knows how to play the drums (but only in Sonic Ultimate Band). She has no known super form and her ability type is flight.

Razz can be careless and sometimes her sass can annoy people. 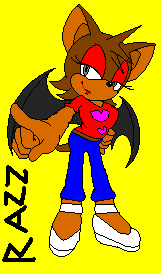 Dislikes: Rouge, anyone who annoys her, anyone who messes with her friends, silence, and tofu

Rouge the Bat (her childhood rival) 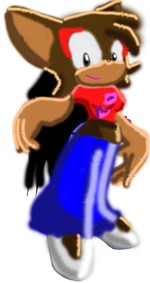 Retrieved from "https://sonicfanon.fandom.com/wiki/Razz_the_Bat_(2009-2010)?oldid=889225"
Community content is available under CC-BY-SA unless otherwise noted.