Start a Wiki
This character is only relevant to the Doriteverse continuity, created by Disgustedorite. Please do not use anything from this page for your own fanon without permission.
Razor the Raptor 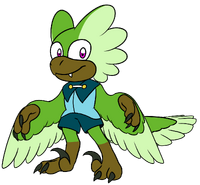 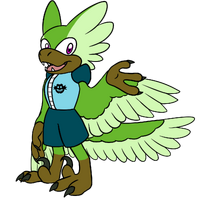 Razor the Raptor is a green dromaeosaur of ambiguous gender who serves Robotnik's empire within the Doriteverse continuity.

Razor is a green dromaeosaur with a brown snout, hands, and feet. Razor has a lighter green belly and flight feathers. Razor's tail is long and has a fan of light green feathers radiating horizontally from its entire length. Razor has magenta eyes and dark grey-green claws. Razor has three claws on each hand and foot, and the hooked, elongated innermost claw of each foot is raised to keep it sharp.

Razor has two feather crests positioned like ears. They are rounded in the "classic" design, but pointed in the "modern" design. The sides of the crests that face outward are lighter in color.

When drawn in a realistic art style, Razor should also be depicted with dewclaws on their feet, similar to real raptors.

Razor wears a light blue sleeveless shirt, dark blue shorts, and a dark blue cape. Razor does not wear any shoes or gloves.

The modern design is not in current use and will change--in fact, a new and unrecognizable modern design has already been made. It is only included because it was what Razor was originally designed to look like, I am not ready to reveal the new design for the same era yet, and it is significantly different from the "classic" outfit.

Razor wears a blue vest with a white zipper thing in the front and darker blue shorts and shoulder pads. The Eggman Empire logo is embroidered in black on the left side of Razor's vest. Razor does not wear any shoes or gloves.

Generally, an Eggman Empire uniform like this would have sleeves; however, those would get in the way of Razor's flight feathers, hence the presence of shoulder pads instead.

(Note: The Eggman Empire logo on Razor's vest is taken from official artwork. It will be changed in all likelihood.)

This section is mainly for personal reference.

Razor's personality is mostly unknown, but what is known is that they have a strong sense of pride and seem to look down on those who don't serve Robotnik. Razor is also known to see robians as lower and expendable. They still appear to have some code of morals, however, and tend to be less brutal than one would expect from a villain with such an edgy name.

This section is mainly for personal reference.

"Robotnik having a dinosaur child minion is absolutely absurd and I will do everything in my power to acknowledge that."
—Disgustedorite, creator of this page

Razor's history, including the reason for their existence in this time frame, is largely unknown. What is known is that they were apparently adopted and raised from an egg by Doctor Robotnik, but it is unknown where the egg came from or how Robotnik got his hands on it.

Razor's gender is unknown. Their voice is too ambiguous to make an accurate judgement from it. They do not correct anyone regardless of what pronouns are used, and neither Razor nor Doctor Robotnik have responded to questions regarding Razor's gender. Apparently, Razor does in fact have a binary gender identity--but they stubbornly refuse to give anyone even a hint as to which it is.

Razor is theoretically capable of using the chaos emeralds to teleport or go super, but does not yet know how to do so. Otherwise, the only apparent "power" Razor has is minor air manipulation, but this is a natural side effect of having wings.

Razor is apparently a skilled mechanic, able to repair badniks and other robots on the fly during battle.

Aside from general weaknesses common across all Mobians, most of Razor's weaknesses are currently unknown. 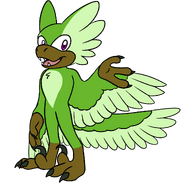 Modern Razor without uniform
Add a photo to this gallery

In the event that Razor is modded into a Sonic game, including modding-compatible fan games such as Sonic World, this is a general guide for the type of gameplay Razor should have.

For fan games that are not rom hacks or games where it's possible to mod in custom abilities, Razor should have gliding momentum-based gameplay. Like a treasure hunter, Razor can glide, but they are also able to dive and swoop back up. Razor can also gain additional height by flapping, but this should be heavily restricted by a stamina bar. Razor should be able to climb soft or rough surfaces, including wood, fabric, and rough rock faces, but not relatively flat solid surfaces such as well-mortared bricks or smooth rock faces. Razor should have melee attacks based around kicking, and should be able to slice foes with their wings while diving. Razor should also have a ranged but inaccurate wind blast attack which can be used from the ground. When Razor doesn't have access to boost panels, they should still be able to climb steep inclines by flapping their wings--like with gaining height while gliding, this should have a stamina bar associated with it. If Razor jumps on an enemy, they should be able to pin it down and attack while flapping to keep balance, again with a stamina bar; this should also be an expected mechanic to be used often during boss fights.

Where custom abilities are not possible, the preferred option is "treasure hunter" gameplay--gliding and climbing with melee attacks, such as Knuckles or Rouge in the Sonic Adventure games and Sonic '06. If the game being modded is Sonic Heroes, Razor should be a flight type, and if the game being modded is part of the Sonic Boom series, Razor should play similar to Tails but should only use melee attacks except for the charged up attack, which should be a wind blast. Any time a ranged attack is required, it needs to be replaced with a wind blast. Homing attacks and enerbeams are acceptable if all characters already playable in the game have them.

If a super form is required, Razor's super form should be golden-orange in color and aura. "Dark" forms should shift to a desaturated blue-green hue.

Where applicable, such as when modding Razor into Sonic Generations for some unfathomable reason, "classic" Razor should be better at flight-oriented abilities while "modern" Razor should be more physically powerful.

Note: These notes, especially immediately above, are currently considered outdated for Razor's eventual modern redesign, for reasons that are currently the most well-guarded spoiler about Razor thus far. Speculation is encouraged.

Retrieved from "https://sonicfanon.fandom.com/wiki/Razor_the_Raptor?oldid=1854501"
Community content is available under CC-BY-SA unless otherwise noted.