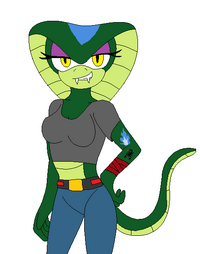 Rasna the Cobra is a character first appearing in the fanfic Sonic: Terror of Crimson as a antagonist and a ally to Agent Shinu. She first appeared in chapter 15.

Rasna is a dark green cobra with brighter green scales on her underside of her hood, muzzle, stomach down to her tail. From behind her head and neck she has a blue streak. On her left arm are two tattoos of a blue flame and a scorpion with a bloody stinger. On the wrist is a red sportsband. Her outfit consist of blue pants with a belt and grey shirt. She is also barefoot.

As she told Miho Satsuma, she has been poisoning many students at a highschool using her bite on them one by one, causing them to suffer hallucinations and eventual death. She was then caught and sent to GUN Prison where she met Miho.

Rasna is a very cold and lethal individual who shows almost no remorse when it came to poisoning people. She is also very calculating as she plotted to poison the students at the highschool to suffer her poisons side effects. When it comes to her cell mate she is good at making friends.

The only superpower Rasna has is that her poison can cause hallucinations and eventual death if the victim gets enough of it in the bloodstream. She is also great at fighting by moving swiftly and has been training in thai boxing.

She possesses great skills in plotting her schemes and using weapons such as knifes of poison darts if needed. She also knows well how to drive a car.

Retrieved from "https://sonicfanon.fandom.com/wiki/Rasna_the_Cobra?oldid=1777036"
Community content is available under CC-BY-SA unless otherwise noted.