Start a Wiki
This is an article about Rashid the Rat, a character created by Jaredthefox92 on 06/19/2015. 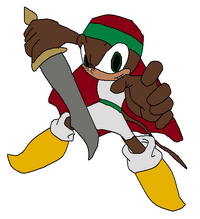 Rashid is a Mobian rat and a renowned merchant in Jaredthefox92's Sonic fan series, Flawed Deities. He is from the middle eastern Land of the Many Sands. Rashid is a shrewd and cunning, yet friendly and hospitable man who is only interested in making a fortune through his mostly legitimate business ventures. Rashid often seen riding upon his trusty traveling companion, a camel named Hassan.

Rashin is a Mobian rat of average size for his species with dark brown fur. He is seen wearing a turban often or perhaps a cloak when traveling through the desert. Usually Rashid is sporting a calm and friendly, yet somewhat dishonest smile or grin upon his face. He is known to wear various types of clothing and isn't shy about dressing up for formalities or for perhaps profitable opportunities for himself.

"Customers to serve and money to make!"

Rashid possesses a friendly and calm demeanor, he is often known to be very open minded, especially when dealing with matters that may be beneficial to himself. However one should not take his pleasant demeanor for foolishness, Rashid is a very shred and cunning business man. He is often known to be determined as well when bartering or trading with other merchants.

Obviously Rashid is known to be a tad greedy and conniving as well. He is known to go so far as to even sell items such as Eggman weaponry to freedom fighters, and give out information to the highest bidder. Rashid however has a compassionate side as well, he seems to be generous to give to those less fortunate than himself when they truly need it and seems to value equality as well.

"I know how to use this you know. Though I'd rather not, it's bad for buisness." -Rashid when drawing his scimitar.

Details about Rashid's past is blurry to say the least, but it is believed he may have gotten his scimitar sword training from either a family member who was an arabian knight, or perhaps he is a former arabian knight himself. Whatever the case maybe it seems that Rashid is now only concern with a living of making money via being a merchant.

Through his experiences Rashid has become to be very good in terms of spotting and making deals and communicating with others to do business. He is known to be a tough, sly, and very competitive businessman who is not afraid to hagal and even lie to obtain what he desires. Finally, he had grown adept in riding and even driving vehicles as well.

Rashid defending his clan's caravan from an enemy knight. 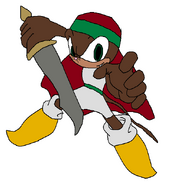 Add a photo to this gallery
Retrieved from "https://sonicfanon.fandom.com/wiki/Rashid_the_Rat?oldid=1800017"
Community content is available under CC-BY-SA unless otherwise noted.