""Sometimes you just got shut out what other people think and let your heart do the talking!""
—Raptor the Dragon

Raptor the Dragon is a Winged Regal Dragon from the Hidden Emerald Dimension and is the prince of the Pyron Kingdom in Dragon Canyon. He is the best friend and trusted ally to Rosie the Echidna. 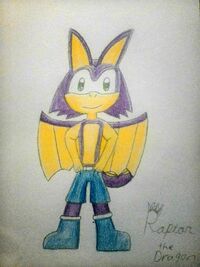 Raptor is a Winged Regal Dragon from the Hidden Emerald Dimension. His kind is a rare species that share a few similar traits with bats, such as big ears, and are well known for their great loyalty for their loved ones and for taking charge of areas in the Dragon Canyon area of the Hidden Emerald Dimension. Winged Regal Dragons are sturdy, fast in the air and can naturally wield magical power, based on their attribute.

Raptor is three feet and seven inches tall, weighing in at an approximate ninety-five pounds. He has purple fur, yellow skin and muzzle, and emerald green eyes. As a Winged Regal Dragon, Raptor shares common traits with his species such as big, bat-like ears, large, purple wings and a purple tail with yellow spots.

Raptor usually doesn't wear much clothing, normally being seen in his blue shorts and boots. His upper body is usually bare since he doesn't really like wearing shirts due to his wings being in the way, though does have a black Judo-style uniform he likes to wear during training, with slits in the back for his wings.

Raptor's very intelligent and compassionate, being the one who is always willing to listen to another's problems and try to find a solution, even at his own expense. He's very loyal to Team Wonder Warriors and does everything he can to contribute to his allies, even if it means putting his life on the line. Raptor may appear to be fully matured but he's still a baby dragon since Winged Regal Dragons reach adulthood at the age of one hundred. Meaning, he can be emotional sometimes.

When he's not busy assisting his team, Raptor enjoys discovering new things and learning about the world around him. He often spends time researching different aspects Mobius, both the Hidden Emerald Dimension and the mainworld, such as natural phenomenon, ancient history, and even health science for different species. He also likes to collect ancient artifacts with plenty of historical background and/or sentimental value, like scrolls and old swords. Raptor even has a bit of artistic side, leading to an pleasure in creating different things. He's always trying to practice with his magical abilities to create new attributal spells as well as crafting different potions and medicine. He even loves to bask in the art of cooking. With all of that in mind, Raptor has a lot of different hobbies but it never seems to deter him from spending time from his best friend, as he always likes a nice training session with Rosie whenever the opportunity rises.

Raptor has a pretty rough past and often does not being reminded of what happened to him when he was a younger child. Because of what happened to him way back then, he tends to be very empathic and hates to see other children abandoned or orphaned, without a family to look after them. He views his family and friends as personal treasures and doesn't like to see any harm befall upon any of them.

Raptor was raised in the Hidden Emerald Dimension, born into a royal family in a mystical mountainous region, primarily run by dragons, known as Dragon Valley. He was quite shy as a young lizard and spent most of his time with his father, King Dracon, and his mother, Queen Taria. His life was pretty normal until his jealous, evil uncle, Mange, barged into his home to steal his father's throne. After a long battle, Dracon was defeated Mange took the throne, resulting in Dracon and Taria being imprisoned and Raptor banished to barren, arid Badlands, seen as useless.

Raptor soon found himself all alone, left to die in the desert area, until his cousin, Veloci, who was exploring the area for a travel guide, found him and helped him out of the Badlands. The young dragon was desperate and told Veloci about how his parents were robbed of their throne and how he was cast away to die. Not wanting things to end like this, Veloci took Raptor under her wing, taught him how to fight through martial arts training, as well as introducing him to magic. After several months of training, Raptor decided to go back to Dragon Valley, accompanied by Veloci, and face his evil uncle in a final duel to save his family. Thanks to all that he learned from his cousin, Raptor was able to defeat his evil uncle and free his parents, bringing the family back together again and winning back the throne.

A few years later, Raptor wanted to step away from Dragon Valley for a while and see the outside world. He left the comforts of his home and traveled to a cool spring near Aura Town, where he met Rosie the Echidna, who was training near the water. Having admired the young, martial artist echidna's dedication and persistence in her practice, Raptor decided to say hello to her and soon the two in locked into a long, pleasant conversation. The two realized they had a lot in common and spent the whole day together, strolling through the town, stopping for sushi and, eventually, spending the night in Rosie's family dojo. The day after, while taking a short flight over a forest region, Raptor spotted Rosie again but this time, instead of a peaceful encounter, she was attacked and ganged up on by members of a rogue dojo. He knew how it felt to be all alone in a troubled situation so he took action immediately and dove into the fight, scaring off the attackers and saving his new friend. He didn't waste any time taking her back to her home and helping her recover, using a healing spell. As much as she and her sister were grateful for the young dragon's help, Rosie felt powerless and began to give lose hope in herself, having gone through many years, beaten by other martial artists and being viewed as the weakest fighter around. Raptor didn't want to leave his new friend in this state so, with the help of Rosie's sisters, he used his magic to jumpstart the energy deep within her body and help her achieve her True Potential. From that day forward, the two have been the best of friends and did almost everything together.

Through the following years, Raptor created a giant tower of clouds in the sky to serve as his home, the Sky Tower, above Aura Town so he could remain in close vicinity with Rosie, as well contribute to the area below, using his magic powers to resolve the problems of others. He made sure to maintain his friendship with Rosie and swoops in to visit her, from time to time. The two eventually forged a team together, Team Wonder Warriors, to protect the entire dimension from danger and help all individuals in need. Whatever the situation may be, Raptor always makes sure to offer his assistance to others.

· Supersonic Flight - Raptor can naturally fly in the air at speeds reaching Mach 7, when he doesn't have a lot of people on his back, making him much faster in the skies than he is on the ground.

· Pyrokinesis/Cryokinesis (in colder temperatures) - Fire is Raptor's primary attribute under normal conditions, allowing him to breathe powerful fire from his mouth and control flames at will. However, he is also among the few non-Water attribute HED Mobians that can actually change their primary type in accordance to the climate change. When the weather around him grows cold, especially in the winter, his attribute shifts to a Water attribute, giving him the ability to wield ice attacks and gives his techniques a cold touch.

· Aerokinesis - With Wind being Raptor's secondary attribute, he is able to concentrate Wind energy into his wings for certain aerokinetic attacks, such as harsh blasts of air.

· Magical Abilities and Alchemy - Raptor has been trained by his cousin, Veloci, in the art of necromancy, giving him the power use his attribute to cast magic spells for various effects. He can use utilize alchemy, using it to summon many different objects, elements, and even transform certain items into different ones.

· Swordsmanship - Raptor is highly skilled with a sword and can hold his own in a sword fight.

· Experienced Chemist - Raptor is competent and capable of handling many different liquid substances and chemicals in order to make something new. He often combines this skill with his magic to forge many different kinds of potions to aid his allies.

· Martial Arts Knowledge - After he was exiled from his family, Raptor was trained by his cousin, Veloci, in several forms of martial arts, making him formidable in hand-to-hand combat. This trait only got better when he became friends with Rosie, for he was able to further his fighting skills and learn a few more fighting styles.

· Omnilingualism - Raptor can understand and fluently speak almost any language spoken by mobians and humans, especially Latin which he uses to cast his magic spells.

Being a Winged Regal Dragon, Raptor's body is very tanky and tough, making him able to endure attacks very well and sometimes is capable of taking physical blows without even flinching. It takes someone with great strength to be able to damage him. He also possesses a great amount of physical strength, an acute sense of smell and excellent hearing, thanks to his bat-like ears. Also, due to his attributal, he has a natural resistance against Plant-based and natural energy of the Forest attribute and when he shifts to the Water attribute from cold climate changes, he ironically gains a resistance against Fire-attribute attacks.

As a Fire and Wind attributer, Raptor is more vulnerable against Water, Earth, and electrical attacks, meaning he's more easily harmed by said attributes, and when he shifts to a Water attributer from cold climate changes, he's also vulnerable to Plant-based energy, or the Forest attribute.

Raptor doesn't exactly have much in the Invulnerability department, besides a HED Mobian's naturally sturdy and impenetrable body.

Raptor's firery energy flaring around his body as he raises his Dragon Sword
Community content is available under CC-BY-SA unless otherwise noted.