Rapidthehedgehog, the author of Rapid the Hedgehog, considers this page to be unfinished. As such, some sections may change. 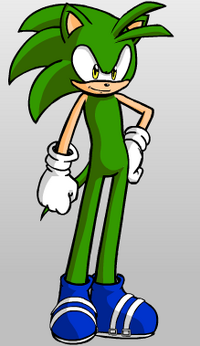 Rapid was born to Weepillow and Rapa the Hedgehog but the two were forbid to love each other and the baby made too much noise. To prevent their cover from being blown, they sold Rapid to some aliens and he was taken to Z4-B3 or Zada Ban, a light brown, rocky planet located close to Mobius' farthest moon. Rapid was raised by a kind seedrian named Landon Sidonis. Landon taught Rapid how to fight and helped unlock his chaos and energy manipulation attacks. Zada Ban was under attack by Exodus the Hedgehog when Rapid turned 8, and Exodus succeeded in his plan to destroy Zada Ban within 24 hours. Before this happened, Landon sent Rapid to Mobius on one of the few escape pods left. Rapid landed on Mobius, scared and confused. Four years later, his parents went to a jungle to raise their other child, Krinkinko. They were killed shortly by Exodus' henchmen after Rapid's arrival on Mobius due to his ties to the Zada Ban destruction. Rapid ended up raising himself and met many people that helped him survive. When Rapid was about 13, he met Fist the Echidna, his first best friend. Fist let Rapid stay with his family until he was able to live successfully on his own. Fist and Rapid trained with each other, strengthening their bond as well as their combat skills. Today, he now lives in Stoneview City. Recently he met his long lost brother, his adoptive neice and adoptive nephew.

Rapid is a green hedgehog. He has two "spikes" of hair coming out the front of his head above his eyes on his forehead. He has peach skin. His eyes are yellow, but they change colors during transformations. Rapid wears blue shoes with white straps with silver buckles. He wear plain, white, basic gloves. Rapid has a short, yet pointy nose. He usually has a cocky smile on his face. Often compared to Sonic the Hedgehog's smile, Rapid's smile warms the hearts of many people.

Rapid can create, shape and manipulate energy, one of the basic quantitative properties describing a physical system or object's state. It can be transformed (converted) among a number of forms that may each manifest and be measurable in differing ways. The law of conservation of energy states that the (total) energy of a system can increase or decrease only by transferring it in or out of the system, thus the total energy of a system can be calculated by simple addition when it is composed of multiple non-interacting parts or has multiple distinct forms of energy.

Rapid will run, jump as high as he can in the air, spin rapidly, and kick his opponent, usually sending his opponent flying backwards spinning vertically.

A flurry of punches and kicks. Rapid usually runs up to his opponent, sends a few punches, a kick, and an uppercut to finish it off. His most common attack, Rapid relies on this attack to get a battle over with.

Rapid will run at his opponent, sometimes waiting for them to attack, and slide forward and eventually roll into a ball. After he gets real close in his ball, he jumps up and strikes his opponent. However, unlike most spin dash techniques, this one is where he bounces of his opponent. So ultimately, Rapid will hit his opponent repetitively and very quickly, hence the name Rapid Dash.

Being a hedgehog, Rapid can coil up into a ball. He can also spin. For his Flash Dash attack, Rapid runs, jumps in the air, does a spin dash, and goes around his opponent as fast as he can. This attack usually creates winds up to 20 miles per hour. This attack isn't countered often, but it is usually easy to dodge.

The spin dash, is a simple attack performed in a ball. Rapid will get in a ball, spin, and go into his opponent. This attack usually knocks his opponent down. However, this attack is performed slower than most and is easily able to be countered.

He shares some traits with his brother such as them both liking to better their skills by entering tournaments and their lust for girls but they are more different than alike. Rapid always likes adventures and hates sitting around though he is willing to relax only when he's with his friends Rapid also is more calm and cool than Krinkinko. Rapid has recently became a fan of dubstep. He enjoys making his own. He tries too hard to make his dubstep however. He is a singer by heart. He also enjoys the piano and drums. He is better at the drums, yet he strives to be a piano star. He receives negative comments from Fist, but he just shrugs them off. He hopes Krinkinko will accept his piano playing, but never dares to play in front of him, fearing Krinkinko will dislike his playing skills. Rapid is a very horrible dancer, but he enjoys it anyway. His dancing skills are basic break dancing and a bit of salsa, but he does not have an avid partner available.

Rapid met Desiree at a baseball tournament they both were in. Desiree was interested and asked Rapid his age. Trying to seem cool, Rapid lied and told her he was 21. Heartbroken, Desiree backed off. Rapid didn't catch on until he saw how hurt he was. Then Rapid revealed his real age of 16. This began their relationship. As Rapid continued to adventure and leave Desiree on her own, the two decided to split only so no one gets hurt. The two are still friends. They have decided to stay as friends as well so they can talk to other people.

Kyros is one of Rapid's closest friends besides Fist. Kyros met Rapid on a random adventure and the two feuded at first but became friends quickly. Rapid and Kyros are basically more like brothers than friends. Rapid looks after Kyros and Kyros does the same. The two enjoy adventuring together as well as hanging out.

Fist is Rapid's first friend ever. The two went to high school together and graduated together. After they graduated, they started adventuring more than usual. They went on huge adventures and even missions they were requested to do. As they made more of a name for themselves, they started a team, The Strike Force. From here, they operate in their headquarters in Stoneview

Handy is Rapid's "little brother that he never had". He looks out for him like one. Rapid met Handy after saving him from bullies. Rapid stood up for him, something Handy had never seen. As Handy grew more mature, Rapid didn't have to watch over him any longer. Handy and Rapid are rarely seen together, but are still close friends.

Retrieved from "https://sonicfanon.fandom.com/wiki/Rapid_the_Hedgehog?oldid=1650938"
Community content is available under CC-BY-SA unless otherwise noted.