The author of Rana Franklin considers this page to be unfinished. As such, some sections may change. 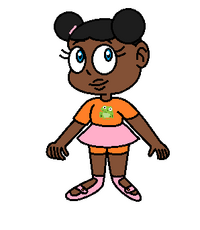 Rana Franklin is a fan character created by Heroic412229. She is Sid's four-year-old little sister who lives with both him and their grandparents after their parents deceased in Sonic Overload. She was a major character that helped drag her deceased parents to a safe place with the help of both Tails and Amy, as well as help Sid become free from Ominous's corruption. After the events, she was going through depression and grief over the loss of her parents, along with Sid.

Rana is bold and curious to a fault, as well as a bit whiny at times. Despite that, she can be very sweet-hearted and has more common-sense than her older brother usually.

Rana is a four-year-old, brown skinned little girl with black hair that comes in the form of round pigtails that are held together by pink rubber bands. She also has blue eyes and wears an orange shirt with a picture of a green baby frog on the center of it and a pink, pleated skirt. She also wears orange pants and pink sandals with white socks.

Rana is usually bold, intuitive, and inquisitive to a fault. She is very curious about the world around her and often has trouble understanding things like "plot-convenience" and Sayonara". She can also be a bit whiny and a bit of a snitch when she sees her older brother do something out of the ordinary, like monologuing or calling her annoying.

Despite this, she is very sweet-hearted and compassionate and shares a mutual love for others with her older brother. She also usually has more common-sense than her older brother and has a need for understand things as well as a willingness to grow up and see her older brother grow up as well. She is also very grateful towards others who help her.

After the events of Sonic Overload, Rana gains a bit of depression and grief of the loss of her parents.

Similar to Sid, she does become more mature and less whiny overtime. While she still has trouble understanding things, but does begin to learn a lot as time goes on.

Before the events of Sonic Overload, Rana was living a normal, yet very annoying life with her brother constantly monologuing about wanting to have an extraordinary life and be like his hero, Sonic the Hedgehog. She, along with the rest of the family, tries to get him to grow up and act more mature, but with varying results.

She had always wished that her brother would finally see that he needs to grow up and stop acting immature, since he first started liking Sonic the Hedgehog, but had doubts if that ever happen.

At the events of Sonic Overload, during the assault of Ominous in Station Square, Rana heard and saw her parents die by Ominous and started crying over her loss. When Sid came to see if everyone's okay and comforted her when she was crying, she showed him their dead parents and barely noticed his new form.

After Ominous threatened to do the same the rest of his loved ones, Rana wanted to join him in the adventure to help him, but he told her that it was too dangerous and to bring her and her parents to the safe zone, which she did.

Sid is Rana older brother. While they have been known to annoy each other a lot, they still care about each other and want to see each other safe and happy, like when Sid felt guilty for leaving her behind and even apologizes afterwards and Rana saving Sid from Ominous' corruption. They also share a mutual love for others. Rana usually has more common-sense than her brother, despite not being able to understand things like "Plot-convenience" and "Sayonara", and just wants to see her older brother grow up like the rest of the family.

Clover and Rana are good friends with one another due to Clover's love for children. Clover's always willing to play with her when needed and help her deal with her feelings. Rana finds Clover to be the mature sibling she's always wanted and admires her down-to-earth personality.

Rana and Alex seem to be on good terms with one another, despite Rana thinking that Alex is a more exaggerated version of Sid's personality. Alex has a soft spot for her, but doesn't want to admit it. Rana finds him very

Retrieved from "https://sonicfanon.fandom.com/wiki/Rana_Franklin?oldid=1874218"
Community content is available under CC-BY-SA unless otherwise noted.