I gotta admit, it's kinda fun turning into a mermaid sometimes. It's basically like losing your legs and having to flop around. Sure it's uncomfortable, but when your in the water, you'll get used to it real quick

— Rainfall talking to her friends about their transformation 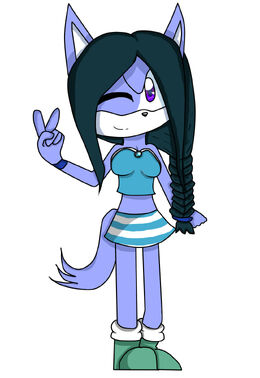 Rainfall the MerWolf is a fan character created by Darkest Shadow. She is one of the three girls who transformed into a mermaid at Fenty Island.

Lola Katrina Magorium is a sixteen-year-old wolf from Beach Cove. She is a well-known fashion model, crowned to be the official Junior Miss Universe of 2014. After this big event, many people started to recognize her as she was showered in fortune and popularity among photographers. She still models for clothes, products and other things in magazines, catalogs, and sometimes even newspapers! Before her big title, she has won many crowns, ribbons, and trophies from countless amounts of pageants.

Along with being one of the most popular models in the world, she also has a very dark secret. At the age of eleven, she transformed into a half-wolf and half-mermaid! After touching water for ten seconds, she loses her legs and grows an orange fish-tail instead! This also granted her a few extra powers as well. She struggles deeply to hide this from other people and strangers, especially the media. With her being a model, it's extremely hard for her to attend some photoshoots because they involve water.

Prior to her transformation, Rainfall was very outgoing. She was rarely ever seen at home without her friends over. She happened to be rather popular among her town, due to the fact that she was and still is a model. After her transformation, she still is outgoing but doesn't go out as much as she used to. When she was just an ordinary wolf, she always hung out with different people, but after, she only hung out with her main clique and/or the people who know her secret.

Rainfall also happens to be a very trustworthy girl. Due to the fact that she has and still is successfully keeping the secret of her being a mermaid, she can hide anything with good skill. She doesn't like to call it lying, she just calls it keeping secrets. She also understands pain and sorrow when her friends are depressed and most of the time, she can relate to it.

Most of the time, Rainfall is a calm figure. She likes to relax a lot, away from water, of course. When she's not with her friends, she's probably laying on bed looking at her phone or doing homework. She also doesn't freak out during really stressful times, with the one exception of getting water on herself and growing a fish tail ten seconds later. However, the bracelet she wears on her right wrist allows her to stay in wolf form even when doused in water.

Heavily contradicting her calmness, she happens to act differently in an area where anyone can make direct contact with water. When she's at a beach, she'd probably stay on the sand the whole time, unless she wants to go for a swim while nobody she knows is around.

Standing at about 3'5 and weighing about 72 lbs., Rainfall is light blue fur wolf. The skin underneath her fur is white, along with her muzzle, and inner-ears. She has dark blue-green curly hair reaching to a little above her back. Some of the curls are even in her bangs. Her tail is long and bushy. Her fur covers her arms, but not her stomach. Her eyes are connected with three eyelashes on each eye, covered by her hair, and her pupils are purple.

Currently, Rainfall wears a teal sleeveless crop top with a white trim and a piece of turquoise gemstone in the middle of the trim. Her tummy is showing, and for bottoms, she wears a horizontal-striped teal and white skirt. For shoes, she wears a pair of sea green sneakers with white socks. She keeps her hair in a fishtail braid, and has two blue wristbands to help control her powers.

When touching the water, all her clothes from her breast up disappears and turns into scales. These scales are colored in a pale orange color. Her large fish tail is the reason why she appears six inches taller than normal. The breast area gives off orange scales in the shape of a bikini top color, with the stomach showing. No matter how she wears her hair as well, it will always turn curly and worn down unless it was wet.

As a mermaid, Rainfall possesses the ability to transform into a mermaid ten seconds after touching water. Once her body is completely dry, she turns back into a wolf along with the clothes she was wearing before she transformed. As a mermaid, Rainfall has the ability to swim at super speed of 600km/h, hold her breath for more than fifteen minutes, and dive at a depth lower than any ordinary human being is capable of.

Even before becoming mermaid, Rainfall has the power to be able to manipulate water, or any kind of liquid in any way she chooses. She can make a liquid appear from any source, whether it'd be the ocean, or just a simple glass. She can also levitate water into any shape, mostly just an ordinary sphere though. However, she gained the ability to manipulate water from the palm of her hand upon becoming a mermaid. She even found a way to make water explode.

When Rainfall fell in the Moon Pool during a full moon for the second time, her hydrokinesis was upgraded to aerokinesis;the power to manipulate wind. With this power, she can stir up some strong winds even when the windows are shut. She can also use the wind on herself to make her appear like she is flying. Using the power of the wind, she can lift up to a metric ton with enough focus and strength.

When a mermaid unexpectedly comes in contact with water, they have ten seconds before they lose their legs and gain their tails. This has been a severe problem for Rainfall, and her two friends in the past, as they try to avoid water as much as possible, and whenever it hits them, to dry it off as fast as possible. In the mermaid form, it takes up to a half hour before they regain their legs. Now, she gained a bracelet that will help her stay in human form.

Like all mermaids, when there is a full moon, Rainfall must not look at the moon or its reflection, or touch the water. When this does happen, she falls under the "Moon Spell", which causes random effects, mostly dangerous ones. Some of these effects are Siren Singing, uncontrollable use of her powers, and being brainwashed to go to the Moon Pool. These effects wear off when the moon sets, and she will have no memory of what she did.

Retrieved from "https://sonicfanon.fandom.com/wiki/Rainfall_the_MerWolf?oldid=1798417"
Community content is available under CC-BY-SA unless otherwise noted.