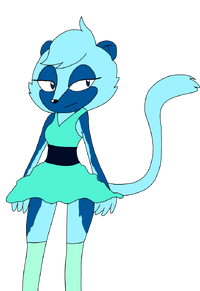 GothicBandicoot, the author of Rain the Sifaka, considers this page to be unfinished. As such, some sections may change.

Rain the Sifaka is a female lemur with the power of hydrokinesis.

Rain is an ice blue Coquerel's sifaka with a darker blue muzzle, facial markings, and ears. She has navy blue eyes, and the markings on her arms and body are also navy blue. Rain has a large tuft of bangs on top of her head. Typical of her genus, Rain has a long tail with a rounded tip. Her legs are very long and are good for jumping.

Rain wears a cyan dress with a very dark blue (almost black) sash around her waist. Her socks are light mint green, and she wears blue flats.

Initially, Rain was distrustful of most people that she met, due to her own personal experiences. However, as time went on, she grew to become more accepting. Rain is very cynical, and is often self-loathing. She tries to hide her self-hatred from others, but many still notice it anyway. Rain is also a defeatist when faced with an enemy stronger than herself. She fears confronting those that she knows will beat her. Her defeatist mentality leads some to believe that Rain is a coward. She is very deadpan, as well, having a dry sense of humor. Laziness is a flaw of hers, and she often procrastinates. She is also easy to take advantage of and control.

Rain was born in Madagascar 22 years ago to Jump and Aqua the Sifakas. She discovered her power at a very early age (6 years old, to be precise). By the age of twelve, Rain could control her powers well. When Rain was only thirteen, she left home to see the world. This proved to be a bad idea on her part, but she never looked back. She traveled to mainland Africa at first, but made her way to Station Square at 16 after saving enough money. She initially struggled, but she got by. However, things changed when Rain turned 17. At that age, she met a Machiavellian hyena named Vert. Vert manipulated Rain, and used her for his own gain. He became even more deceitful as time went on, and became abusive towards her. Despite the abuse Rain endured, she remained with Vert, thinking that she could not fight back. On her 18th birthday, however, Vert forcefully attempted to come onto Rain, and this is what finally made her snap. She slapped Vert and froze his legs, running away and leaving Station Square. After her experiences with Vert, Rain became very distrustful towards strangers.

Rain, as indicated by her name, has the power of hydrokinesis. This means that she has the ability to control water. However, she needs already existing water in order to do this; she cannot create water herself. She also cannot form ice from water. Rain uses her hydrokinesis as a type of self-defense and when she is in combat, or training. Rain is able to stand, walk, and run on surfaces of water via hydrokinesis, as well.

Like most sifakas, Rain can jump great heights. This enables her to reach heights where some people might not be able to. (TBC.)

Rain is skilled at playing the tambourine. (TBC.)

Rain is vulnerable towards fire, being a hydrokinetic. (TBC.)

Much of the time, Rain and Karin are butting heads with each other. Their contrasting personalities is often the source of this, though occasionally it is caused by something else. Karin is typically the first to instigate one of their many bickerings. Despite their mostly rocky chemistry, Rain has a soft spot for the penguin, and actually wants to befriend Karin. Though she would never admit it to anyone, Rain secretly harbors a small crush on her rival; it is unknown if Karin is the same way.

Rain initially tolerated Vert, due to his seemingly charismatic nature. However, her opinion of him began to change when Vert started to become physically and emotionally abusive towards her. Once he realized that the hyena was simply using her as a mere tool, Rain started to despise Vert. Her disdain for him grew even more when he attempted to "flirt" with her, and she left him after the incident.

Retrieved from "https://sonicfanon.fandom.com/wiki/Rain_the_Sifaka?oldid=1846634"
Community content is available under CC-BY-SA unless otherwise noted.