Start a Wiki
This is an article about Raiden, a character created by CrimsonFlame2K on 07/6/2014.

Not to be confused with these guys. 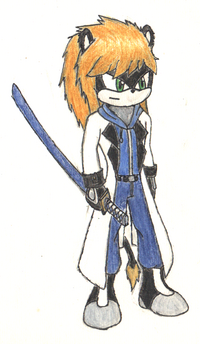 — Raiden to a group of thugs, Clash of Mythics: Genesis

People sometimes say that lightning doesn’t strike twice. Raiden, on the other hand, probably doesn’t believe that to be true in the slightest. He serves as one of the main characters of the Clash of Mythics series, alongside a certain mercenary with a giant slab for a sword. At first, he decides to hunt down for the escaped test subject from the Genesis Corporation known as Burst, but soon finds himself in something bigger.

Raiden is a Mobian lion standing at five feet, five inches. He sports black fur around much of his body, a golden brown mane on his head, and a greyish-white muzzle. Raiden sports eyes with dark green irises, while a series of golden brown streaks can be seen around his limbs, back - some of which extend to the sides of his body, and forehead. His physical form appears to be a lean and well-toned - no doubt a result of his frequent training.

Raiden’s outfit consists of a white long coat with twin coattails, as well as black inner linings, accents, and cuffs. A golden cuff link can also be seen on each of the aforementioned cuffs. Underneath the longcoat is a royal blue zip-up hoodie with a dark grey zipper, and a grey form-fitting turtleneck can be seen under that. He also dons a pair of navy blue jeans held up by a black belt with a silver buckle. Meanwhile, the lower legs of the pants are tucked into a pair of black, steel-toed boots that reach only slightly above his ankles, as well as a pair of black gloves with silver plates on their backs.

Raiden is best described as having a cool and collected demeanor, both in and out of battle. More often than not, Raiden is likely to speak to others in straightforward and blunt manner, rarely bothering to mince his words. To some, this straightforward approach of his makes him appear to be aloof and slightly antagonistic. However, the truth is that he is merely an honest and often serious man, among other things. That said, he is somewhat socially-awkward, given that he has not had any company for some time.

The lion also shows a great deal of discipline and maturity, meaning he rarely gives himself to his inner emotions and lose his rationality - or at the very least, he tries not to let that happen. This also means that Raiden is able to maintain an extreme level of composure in most situations. These particular traits are best presented while he himself is in the middle of combat, where he continuously manages to take down the opposition while keeping a straight face.

That said, he is surprisingly humble and will not hesitate to apologize for any transgressions he himself may have committed or have occurred due to his actions. On the flipside, however, Raiden can become quite emotional when sufficiently distressed. One example of this is how he approaches Zagan with nothing but anger and hate during their encounter at Hollow Mountain while both swordsmen were on their way to find and take down Burst, primarily due to his self-determined goal to exact revenge against the mercenary.

When he's not entirely bent on revenge and when shit really hits the fan, however, Raiden can prove himself to be as heroic as the best of them when it counts. Just don't expect him to act all very friendly with those he ends up having to work with - especially those that have earned his ire.

Raiden possesses their ability to generate and control electricity at will. Having only learned of his powers recently means that he has not reached his full potential. The most he can do in his current state, as far as battle applications is concerned, is augment the potency of his strikes and fire projectiles of electricity from his person.

Some of his techniques include - but are not limited to - the Bolt Spike, a lightning-quick ray of electricity that shoots out of Raiden’s hand, the Bolt Divider, where he performs a quick sword strike coated with electricity, the Voltage Drive, an electrical upward slash, and the Lightning Flash, where he zips past enemies in the blink of an eye while leaving behind a series of electricity-coated slashes.

One technique of note is his Flash Cutter, where he fires a vortex of electrical slashes in front of him simply by drawing out his blade and cutting at blinding speeds. Raiden also sports the Mythic Enchant ability, which he busts out whenever he finds himself in a tough spot. Activating it allows him to tap into a fraction of his true power, which comes in the form of enhanced speed, strength, and agility.

Meanwhile, Raiden also possesses physical capabilities that exceed what the average human or Mobian can do. For starters, Raiden sports an impressive level of speed and agility, which he makes great use of. His speed, in terms of how much distance he can cover quickly, can be considered by some to be potentially on par with even the Blue Blur himself, and how quick he strikes his foes is sure to take any unprepared opponent by surprise.

Raiden is also quite strong for a guy with a relatively-slender build. While he probably won’t be sending anyone flying with one punch, the lion is more than capable of laying a savage beatdown with his bare fists, and can carry heavier equipment, such as broadswords, among others, without too much trouble. He’s also respectably tough and won’t be so easy to take down in a fight.

Attack: 7 - Raiden boasts an impressive level of strength for a mere Mobian. Perhaps there's more to him than meets the eye...

Defense: 6 - Raiden is a respectably-tough nut to crack, and he is perfectly capable of fighting defensively as well.

Speed: 8 - At his best, Raiden is among the fastest in the entire roster - though not necessarily the fastest. Needless to say, he has some rather impressive footwork.

Magic: 6 - As they have been unlocked only recently, Raiden has not mastered the true extent of his powers and abilities.

Evasion: 7 - His agility and reflexes suitably complement his already-impressive speed, meaning he can dodge a great deal of incoming blows with ease.

Intelligence: 7 - His training and self-discipline over the years have honed Raiden into a smart fighter, in direct contrast to Zagan's penchant for raw power. In addition, he also appears to be somewhat experienced in devising strategies.

Skills: 8 - After several years of experience of wielding the sword, Raiden is definitely one of the most skilled swordsmen in the series. Not to mention, he's also quite adept with the usage of his powers, in spite of not having reached his full potential just yet.

Accuracy: 8 - Raiden makes it a point to ensure that his strikes make their mark.

Stamina: 7 - Having trained himself for several years has honed Raiden's body to be able to last for quite a while in battle.

Tolerance: 7 - Raiden is unusually resistant to any physical injuries inflicted upon his person.

In terms of his fighting ability, Raiden is indeed well-rounded and covers most bases rather decently. However, this well-roundedness also means that Raiden doesn't particularly excel on one field or another, meaning that he can sometimes be overwhelmed by certain opponents that can out-perform him in some way. On top of his general inexperience with his electrokinetic powers and other abilities, this means that his swordsmanship and other skills can only save him for so long.

In addition, for how mature and self-disciplined he can be, he is far from perfect. As such, even he has his moments of weakness where his emotions do manage to get the better of him. This can ultimately cause him to act quite reckless at times and leave his judgment rather impaired and clouded, much to everyone's chagrin.

Meanwhile, as it was mentioned before, Raiden is socially-awkward and admittedly not all that well-versed in interacting with other people. His penchant for not beating around the bush, as well as his aloof demeanor and sometimes-brutal honesty, only serves to make him all the more inept at social interaction.

Full-colored drawing of the guy. Aside from that issue with his left eye seriously, it's always the eye, this one came out really well.

Zagan and Raiden standing back to back. Whether it be through some serious teeth-clenched teamwork or just a badass pose before beating the shit out of each other is beyond me.
Add a photo to this gallery

Retrieved from "https://sonicfanon.fandom.com/wiki/Raiden?oldid=1872934"
Community content is available under CC-BY-SA unless otherwise noted.