This is an article about Raging Flare, a character created by CrymsonShokwave.

Raging Flare is one of Crymson the Cat's Super Forme, resembling her deceased brother, Shredder the Cat. 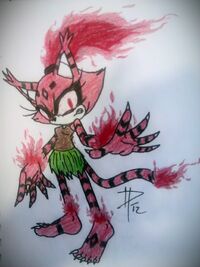 Crymson's Super Forme, Raging Flare, takes a guise of a feral, wild, jungle, lynx-like cat. She has dark red fur with black diamond markings. Her hair is a dark red flame that is tied in a ponytail. She has a brown spaghetti strapped shirt with a grass skirt. She has dark flame cuffs on her tail, wrists, ankles with very sharp claws. She walks barfooted and has blood-shot eyes with no pupils of rage.

Raging Flare's personality consist of vengence and rage only. All in her thoughts are only of rage and destruction, and will detroy anything that is in her way or around her (whether is the person is good or villan) In this form she rarely talks and always to the action beforehand.

Crymson, unexpectedly, recieve this form after she witness her brother, Shredder the Cat, getting killed by one of the G.U.N officers in a robbery incident. The officers mistaken her brother brother as the robbery suspect. Crymson was right near the place where the stand off was taken place with her brother having his hands up. One of the G.U.N officers was acting all high and mighty, with a lot of pride, started to fire all his ammo to her brother, killing him. Crymson was awestruck that she wasn't even there to protect her little brother, and had to witness his undemised death. She came to his corpse as soon as the firing stop, much to the officer thinking that she was a suspect, and started blaming on those exact officers for mistakenly killing her brother instead of finding the real suspect. Her rage became to much for her that a mass amount of dark red flames ringed around her and Shredder's body. She transformed into Raging Flare in a split second, then started attacking them. Though she did not kill them, her thoughts were only on her brother, lying helplessly on the ground. Only by the words of someone talking bad about her brother will only set off her rage and transform into Raging Flare.

Like Crymson, she possess the ability to control fire. In contrast, her fire's color is dark red, symboling her furiosity. She can create an explosion that can only go as far as ten yards. She can even form flames on her hands as huge claws, or use it to burn or protect herself.

This is the only form of Crymson's who specializes in strength. She can lift anything that is no grater than one thousand pounds. She can even create craters just by punching or kicking. She is also known to have a very strong roar that creates a giant shockwave, destroying everything as far as ten yards.

Like all fire users, her weakness is water which she can be easily extinguished. Her other weakness is calming down, which if she does, not only Crymson goes back to normal but she will black out and go unconcious for a certain amount of time depending on how much rage she is taking in.