"Usurper! I'll kill you for what you've done!"
—Rage

Rage the Wolverine is a powerhouse wolverine member of Team Boreal. He has notably poor anger management skills. Despite this he makes a valuable asset to his team.

Rage was typical in appearance to other Oloshkan Wolverine-based Mobians. At 17 years of age, he stands at 4'7" and weighs 104 lbs thanks to his great muscle mass. Eye color and fur color varies slightly amongst his species, really only fluctuating in actual hue—for Rage, this gives him red eyes and brown fur. Like other Oloshkan Wolverines he has a black mask and a tan muzzle, while thick locks hang down and curtain his head. Of these locks, the one at the back of his head is the longest, and ends in a black-furred section.

Many Oloshkan Wolverines forgo clothes on a large level, primarily wearing shoes to protect their feet and a pair of gloves that are used to enhance the durability of their trowel claws, preventing damage to them. Rage is not an exception, and also wears a bare minimum of clothing. He simply wears a pair of white spiked gloves on his hands and red boots with a white "racing stripe" going from toe to heel. Beneath these he protects himself from blisters by insulating his feet with a pair of white socks.

While his species is generally known for their temperaments, he is especially temperamental because the mysterious usurper came to obtain a mystical object on their continental home, and in the process he destroyed a Wolverine village known as Soldokna, where Rage happened to live with his family as an adolescent kit. Both of his parents and his three siblings were killed in the incident, as well as nearly all other inhabitants. With that Rage went wild, and unlike many heroic individuals, actually seeks the Usurper's life in retribution. This puts him at odds with many others, including Sonic the Hedgehog, but his fellow teammates understand his reasoning and mostly try to help keep Rage as calm as they can.

As a member of the Oloshka Wolverine species, Gristle possessed all of their natural abilities; although he was a very promising individual, he did not get the chance to be fully trained in technique before his untimely demise.

Being a Wolverine, he is also capable of burrowing. Using his dual hand claws, he can burrow into the earth, as his species has done to build their dens for countless generations. Due to his seething anger, he is actually faster at this than his regular brethren.

Rage is known for his Bull Rush, an ability where he uses his dual hand claws to keep his ground and pull himself forward while rushing on all fours in a furious if short attack. During this attack he is cloaked in a short burst of energy which prevents injury to himself.

This attack consists of digging one's dual hand claws into the ground as leverage for pulling oneself forward, rushing on all fours in a furious short attack.

Rage, despite his age is actually weaker in terms of his super strength than his late younger brother, Gristle. Even so he is still incredibly powerful, able to lift up machines such as Badniks or cars and toss them with incredible malice.

All Wolverines possess enhanced durability, allowing them to sustain more injury before collapsing; Rage is no exception to this rule.

Being a Wolverine, Rage possessed their natural resistances to both water and cold environments.

Rage's greatest weakness is also the origin of his name: His blind rage, made far more acute after the genocide of his people and the execution of his entire family. Oloshkan Wolverines have a temper that is naturally barely kept in check, and Rage has pushed this barrier to its absolute breaking point. He rarely seems anything other than almost entirely insane with rage, as he has reached a point where he wants the death of the Usurper for any and all reasons, even to a fault. Unfortunately, this could be manipulated by a particularly clever individual. Luckily for all, his teammates on Team Boreal have been able to focus his rage directly at the Usurper.

Rage as seen from the Male Furry Dollmaker. 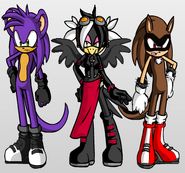 Rage alongside his team, Team Boreal. His markings have been added to this image. 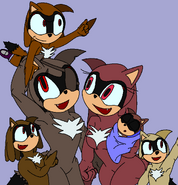 Rage as a child with his family.

Rage as a child.
Add a photo to this gallery
Retrieved from "https://sonicfanon.fandom.com/wiki/Rage_the_Wolverine?oldid=1800013"
Community content is available under CC-BY-SA unless otherwise noted.