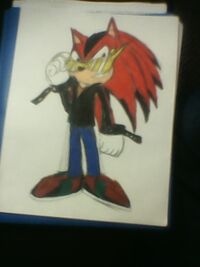 "Oh, that was real nice and selfless of you, ha ha ha. Words alone cannot explain how greatful I am for you and the blood-hungry loony for all the jail time. TOWARD MY OWN EXPENSE!!! Now, and only now because I have you stuck in this  cell, I'm gonna enjoy watching you squirm like the hero I think you represent(Laughs Maniacally as he brandishes his hammer)."

Radon, (Also named "Tirkravaskax" in NegaSpace), is one of the select few Counterparts of Raven the Cyberhog. Unlike the others, Radon is the polar opposite to his heroic twin, and is the second-most dangerous counterpart villain Raven encounters in his time, just beneath Metal Raven. They nearly match each other in appearance, but are opposite personality wise. Radon also sought our the Raggadak gems to benefit Za Nakrota's cause, only if he gets a portion of the empire.

There isn't much to distinguish them apart on a grand scale physically. Radon is 15 years old, but is not immortal, and has tried to be. He is 3'3" has an unmentioned weight. Radon also has peach skin, and blue eyes. He also has red fur on his body, and black streaks on his quills. However, Radon does not have any green hair, and has a black streak in place of it going down his forehead. As for his attire, he wears golden yellow shades, a long sleeved black leather jacket, a white top, and blue denim jeans. He also wears black fingerless gloves and and sports an alternate kind of footware

Radon and Raven are generally opposites between themselves in terms of personality. Radon is also twisted, and minorly sadistic with a undying craving for blood and gore. Radon is mainly in control of this craving, unless he gets hyped on adrenaline, or gets caught up in the heat of the moment. He also strives to prove himself better than his selfless twin, and is rather antisocial toward other beings. While Raven is willing to make friends, Radon does not, as Raven is in a relationship, Radon is not, indicating his souless nature. In general terms he is a loner, who dislikes everyone against, and sets out for personal gains, such as the desire to claim Cyberspace.

Radon has been around for as long as Ravenv has been.  To start things, Radon was born the same day was. However, At age 3, Radon lost his parents when The Conbot Army invaded, both his mom and dad took part in the fight, and they lost their lives when it was over.

Radon was with Rosy the Rascal when they were sent to Their uncle Richard's(Anti-Roscoe) house. As he grew up, he takes an interest in criminal mischief. Radon has been influenced mostly because of Scourge, and the thrill of being chased. The influenced escalated to the point where it was more than just criminal mischief. At age 8, he was influenced enough to where he started carjacking people. He began to do this day and night. However, he would mostly crash the cars he jacked at night.

At age 12, and after 14 arrests, it turns into robbery and arson. He somehow would manage to sneak into stores, rob them blind, and then burn every place to the ground. He has burnt down a total of  55 stores to the ground in 1 year alone.

Eventually, Richard got sick of it and beat up Radon for it, only to get in a knife fight with him and Richard is killed for it. Afterward, Radon and rosy bolt away from the house and find scourge. When radon turned 15, he joined the Suppression Squad , and was given the permission to be Scourge's comissiner of War.

Chaos Surge- If he can absorb enough energy, he can unleash a massive blast of energy that poisons, mutates, or kills any and ALL organisms within range.

Heat senses to track others' trails

He can smell the fear in his enemies

He can absorb radiation with no effects

he has this unfortunate ability to "blow into a mushroom cloud"

He has an unstable transformation that enables him to use radio kinesis and destroy nature.

He can bring a MOUNTAIN into a smoldering wreck.

He can move in TOTAL silence without hearing any sound.

He can easily be distracted by someone who irritates him a lot.

If he is in his form for too long, he weakens out and has to concentrate on his powers, rendering him powerless to retaliate.

To render him into pain, put him in watery areas, which should give him a burning sensation throughout his body.

He'll pass out if he gets angry for an extensive period of time.

"You should know better than to tick off your master."

I'M GONNA ENJOY WATCHING ALL OF YOU SUFFER JUST BY FIGHTING ME!"

I thought this was a fight, not a game of "ring-around-the-rosie"".- Radon during a fight

"Ahh, my powers are springin' up, this outta be fun."- Radon at the start of a fight

"UGH, this water, IT BUUUUUURNS!"- Radon when he is in the water for five seconds.

"This can't be happening. My victory, my empire, destroyed by something so simple."

"You may have proven succession, Raven. But Next Time, you're not gonna be any luckier."-Radon as he retreats

"Hey girl, what's shakin'? No, don't answer because I do."- Radon as he flirts

"Don't even TRY to bring up Raven's name because I will whip the CRAP outta you!"

"How'd you like the taste of my mallet? Pretty sick, ain't it?"

"Well, what can I say? Ladies like Trix' tend to stick around ten-fold."

Raven and Radon look like twins, but Radon has a black streak on his forehead that takes the place of his hair.

Radon seems to be one that makes all the plans, but he always puts himself under pressure.

Radon is serious all the time.

Unlike Raven ,Radon still holds on to his hammer while Raven did away with his in "The Cauldron of Ruefulness."

Unlike Raven, Radon does NOT have any adopted sisters.

Radon has an unstable form that can only be achieved when he absorbs too much radiation.

Radon's extra spikes were the result of falling deep into a radiation pit, which rubbed off the sludge, and mutated him ,probably involving the use of his "Inner Swagger".

Retrieved from "https://sonicfanon.fandom.com/wiki/Radon?oldid=1607817"
Community content is available under CC-BY-SA unless otherwise noted.