Rad is a young squirrel. He is also a Pokemon trainer.

Rad is a brown squirrel. He wears a blue T-shirt, blue and white shorts, long black boots and black fingerless gloves. He is also small for his age.

Rad is a beginner pokemon trainer, as he just turned old enough to become one. His pokemon usually save him when he's in trouble. He also has a pair of tonfa that he was given to by his father. He is very skilled at using them despite his age. He rarely uses them though, usually only when Munch is fainted or for close combat purposes.

Rad is very energetic. He's usually first to volunteer for anything, which is the reason he has his pokemon, Munch. Most of the time he doesn't pay attention to anything. He is very confident. He can be stubborn sometimes, which is a reason why he usually gets into quarrels with his pokemon.

Rad was born in a small town on the outskirts of Station Square. Most of his childhood is unknown. On his 10th birthday party his mother walked in with a Pokeball. She asked if anyone would like to have it. Since most of the other children were nervous Rad was the first to volunteer. As soon as Rad touched the pokeball a Munchlax burst out of it. Rad instantly named it Munch. He then set out on his journey. He has been captured before by an unknown criminal gang. He was later saved by Munch. Rad was surprised at the power that Munch had shown.

Munch is Rad's first, (and so far only) pokemon. He was given to Rad on his 10th birthday. He often quarrels with Rad because he eats nearly everything. He even caused them to get lost once because he ate Rad's map. He is very loyal to Rad and is like a brother to him. He would do anything to protect him. He hates being inside a pokeball, which is why Rad always keeps him out of it. Munch often gets food from seemingly nowhere. He has saved Rad from a criminal gang before. 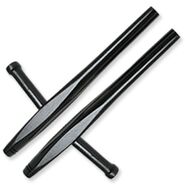 Rad wearing his favorite goggles.
Add a photo to this gallery
Retrieved from "https://sonicfanon.fandom.com/wiki/Rad_the_Squirrel?oldid=1853068"
Community content is available under CC-BY-SA unless otherwise noted.