Start a Wiki
Racket The Raccoon 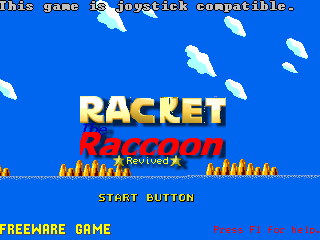 In the game, Racket must prevent the evil Dr.Cockroach from collecting the 3  the Power Gems in the world, in an attempt to take over the Northern Islands, or the whole world if he can. The player controls Racket through 6 worlds, and must face Dr.Cockroach at the end of 4 worlds in his vehicles.

The game plays as a 2D sidescroller platformer,that include several obstacles, such as vegetables, switches, springs, and enemies. The levels are populated with hazards and enemies that Racket must be able to avoid and/or destroy.The player must also avoid bottomless pits, rows of spikes, and ecetera. The game world also has Gems that the player can collect for points. Racket may tornado spin jump and wreck enemies out of the way, and pluck items from the ground up, such as vegetables, to fling at enemies. The player also has infinite lives. Pressing the Home key also allows easy use of resetting the game.

The game also features an Online Highscore engine, which allows players to submit their high-score online for other players to view/beat.

Development for Racket the Raccoon began in June 2010,after ~RacketGames~downloaded his copy of Game Maker 6.1.After getting the copy in the summer of 2009, it took a year for RG to finally know how to use the software, RG then began working on the game immeditetly.

Music for RTR was mostly a remixed or higher pitched version of songs from the Sonic the Hedgehog games, and so were graphics, sprites, and other sounds.

So far, Racket the Raccoon has recieved favorable reviews and comments. As of March 15 2013, it is rated 4.3 stars out of 5 by 3 members on www.sandbox.yoyogames.com. CrazyRiverOtter stated how he loved it, and "Oh well, It's still pretty solid. It feels a lot more like its own game, now."  On GameJolt.com,within the first 2 days of the game's release on that website, it got 4 out of 5 ratings by three members on the site. Gamejolt user Coobie stated "I liked the animations and you should continue in that style. I also like how there's several options for combat".

Retrieved from "https://sonicfanon.fandom.com/wiki/Racket_the_Raccoon(2012_Video_Game)?oldid=1430895"
Community content is available under CC-BY-SA unless otherwise noted.