The author of Rachel the Goat considers this page to be unfinished. As such, some sections may change. 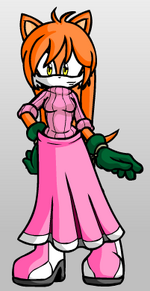 "Get your sweet flowers for two dollars!"
—Rachel selling flowers.

Rachel is a kind goat that is Rodney's daughter. She oringinally appeared in Roleplay:Shadow crystal cloud tournament. She's not considered part of The Legion of Goats. She used to be obsessed with Smash The Echidna but has since moved on. She currently lives in Station Square but spends most of her time at the nearby GUN base or with The Elder of Frog Village and his grandchildren. She is a clerk at the Station Square GUN base and is a flower merchant.

She was created by Rodney to be the referee of the Shadow Crystal Cloud Tournament and made sure no one flirted with her because if she grew attatched to someone her dad would kill her. She then tried to kill Smash and Krinkinko's family but failed. She then realised she loved Smash and went to propose to him but was turned down. Then they were then sent in the dungeon where Rachel revealed everything about her father's plans. After the Shadow Crystal Cloud Tournament she started working at G.U.N. as the phone operator and front desk woman. She currently lives in Twerunka jungle and is trained by The Elder of Frog Village. She used to  constantly stalk and flirt with people but had mellowed out once she saw how the death of a friend negatively affected those around her and decided to sell flowers and comfort them. She does still idolize and have a huge crush on Smash but she knows he will never return her feelings and can only hope one day he can forgive her and become her friend.

Rachel appeared in The Troll Chronicles debuting in her first appearance of G.U.N.'s front desk lady. Here she revealed to Krinkinko how many mission points he had so he could use them to buy Troll Hunting equipment with his new allies.

She appeared in this roleplay mainly to stalk Smash. Here she follows him to the edges of the universe and sneaks into the locker room of the championship where she asked Smash about his cousin (attempting to marry him), flirts with Kyle, asks Krinkinko to the movies (in which he declines), gets thrown out a window by Krinkinko, sneaks back in, flirts with Kyle some more then she leaves after the commander comments on her lateness.

She had an extremely minor role in The Galephani Saga. She first appeared when Fa-La-Stu was wondering who Gale could date now that he broke up with Stephani. She said Rachel but Gale declined due to her stalkerish lifestyle. Fa-La-Stu told him she wasn't THAT stalkerish but then they noticed Rachel screaming and running around frantically "I GOT HIS OLD UNDERWEAR!"

She was later one of the woman kidnapped to make Suprano's perfect wife.

She appeared as a nurse on a cruise ship and she treated Gregory's wounds. Gregory then saved her from the sinking ship and she repayed him by making out with him. Her last appearance was in the jet to Station Square. Although it would seem so Gregory confirmed to Lu-Lu that he was NOT romantically interested in Rachel. She then later appeared with Timeswarp to recieve training with The Elder. She seduced him not to have her take part in the first assignment. Then completed the second assignment. After it was over The Elder offered to rub the antidote on her which she accepted. She also appears in some of Gregor's Witherleaf induced dreams; here she seduces him along with Lu-Lu.

She briefly appears in this roleplay where she flirts with Percius.

As an immature girl Rachel was  seen as insane since she constantly stalks the person she lusted for. She was also very flirty and would flirt with any male that passed her. She wasn't not good in relationships and people tended to not like her and found her creepy. She also knew a lot about the boy she currently liked. She claimed she was Smash the Echidna's biggest fan.

As of late she has definately mellowed out and though she fondly remembers the time in her life when she was wild she has changed for the better. She is now hard working and cheers people up mainly by selling flowers. She's earnest and isn't afraid to tell her feelings. She is loyal to her friends and shows devotion to those she loves. She doesn't stalk Smash anymore and even though she misses him she doesn't send him letters in fear that he'll be scared or get into trouble. Though she has changed she hasn't proposed to The Elder because she doesn't want to be chained down and she feels that she may have a younger admirer.

Smash The Echidna -She was madly in love with Smash and constantly stalked him. Due to this she knows quite a lot about Smash. Smash obviously doesn't return the feeling since he's married, has kids, and since Rachel was a flirty stalker. Smash wiould often get irritated at Rachel's flirty and stalker-like behavior then Rachel wiould pretend to be mad at him but she never stopped loving him. She would also sometimes look inside his window while he slept. After Krinkinko's death she changed for the better and finally agve up on Smash and moved on to have a more stable life. She does think about him though mainly because she never had the chance to apologize for her horrible behavior.

Krinkinko the Hedgehog -She flirted with Krinkinko and he used to flirt back but he then became quite scared of her. Her biggest regret is that he died in fear of her.

The Elder of Frog Village-Visits and trains with him often. Even though he is quite older than her she appreciates the affection he shows her and feels he is the funniest and most charming man in the world...well...close enough. Though she won't reveal her true feelings because she's afraid she might miss an oppurtunity for something great.

Krinketta the Seedrian and Krinkinkoy the Eaglet-Loves both of them dearly and act as the mother that neither of them had.

Rachel is very agile and sneaky. Since Rachel is the daughter of the powerful Rodney himself she has incredible fighting power trapped inside of her and is only beggining to tap into it.. She also has the ability to change her age and appearance for various reasons (mainly so she can sell more flowers). 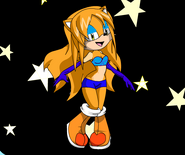 Request made to Fox, Fox, Cat
Add a photo to this gallery

Retrieved from "https://sonicfanon.fandom.com/wiki/Rachel_the_Goat?oldid=1780725"
Community content is available under CC-BY-SA unless otherwise noted.