One Mobian's trash is this cat's treasure! 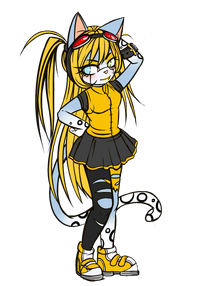 Quinn the Cat is a fan character made by Nikki-Kaji. She is a 19 year old light blue and white, anthropomorphic bengal cat born in Steampunk City. As her birthplace might imply, Quinn is a steampunk at heart, able to create and invent things by using whatever she has available, as well as other people's trash.

Quinn is an 18-year old female bengal cat. She has light blue and white fur with black spots, and a white muzzle. Her eyes are different colors, one being blue and the other green. Quinn has long blonde hair with reaches down to about her knees, which appears to be both straight and messy at the same time. Her tail is about two feet long, and swishes depending on how she feels.

Quinn's outfit has a tomboy-ish, modern steampunk feel to it. She wears a black short sleeve shirt with an orange, cotton-spandex jacket which is sewed up through the center. Her skirt is short and ruffled with orange trimming. On her right leg, Quinn wears a black legging which she cut a few times in the center. On the left leg, she cut up an old pair of orange pants to make them look rough and messy. Quinn's shoes were painted orange and white by her, and the bottoms are made from metal. She wears a watch on her left wrist, and goggles with a red tint on her head.

When Quinn was just a kitten, she always admired her father's work as a mechanic. At the time, her parents owned a car repair shop in the city, though only her father and a few friends of his friends worked there. Quinn's mother did not work due to the fact that she had asthma, and well, Steampunk City was a very polluted place. That's why Quinn had to help out a lot in the house, but whenever she had free time, she spent it hanging out at her dad's repair shop.

When Quinn was eight years old, she befriended a girl named Arabella, who's father worked for Robo Corp. They met after Bella's father's car broke down while they were on the way to a contest that she entered. It was to enter a robot that Bella created on her own, and Quinn was very interested, telling the meerkat that she was very interested in inventing as well. The two of them began hanging out together, Arabella sometimes giving Quinn materials to build her own inventions.

Since then, Quinn began working late at night while her parents were sleeping, watching lots of TV shows with famous inventors and their brilliant creations. At first, things were very difficult. She didn't really have much experience with building anything, and her father could only repair cars. So, once Quinn reached about thirteen, she began leaving home most of the time and went over Arabella's house so that she could get some experience from her and her father.

However, Quinn's mother wasn't very fond of this idea, saying that her daughter should be staying at home and helping her parents. Still, Quinn sometimes did still sneak out of the house, and was often scolded for it. Soon, her mother just stopped caring, and Quinn was grateful.

As time went on, and Quinn became a young adult, she began to take interest in something else: Extreme Gear. Every year, there was a World Grand Prix held in Metal City, which she would have to watch on TV since she could not afford to go there. But one year, a certain citizen named Whirlwind requested Quinn's help. He was going to participate in the World Grand Prix, but his extreme gear had been recently destroyed. However, after spending so much on the travel ticket and entrance fees, he couldn't buy a new one. So, he requested Quinn to build him a new one.

At first, Quinn was unsure of the idea, but agreed to help. She was able to fully build and design a speed-type gear for the young wolf, and was paid for the materials. On the day of the World Grand Prix, Quinn saw Whirlwind on TV using her extreme gear. She was nervous, since this was the first time she'd built extreme gear for someone else. But as the event went on, she saw that Whirlwind was doing great. He even managed to place second overall, getting one less first place win than Sonic the Hedgehog. But still, he looked happy.

Once the event was over, Whirlwind was awarded a silver trophy, and he dedicated it to Quinn. It overfilled this cat with joy, and since then, Quinn has made extreme gear her main focus. She even began building extreme gear for people in Steampunk City, though she still wasn't as popular as some of the extreme gear companies. People even began holding tournaments around the city for fun!

Quinn has a determined spirit, always trying her best at getting things done and getting it done right. She doesn't like to waste time, but refuses to be rushed. Even when time is going against her, this quick-thinking feline always stays focused and makes sure not to screw things up.

Quinn likes to be the leader of every situation, because she feels like she can take on the pressure and can guide everyone in the right direction. However, if someone doesn't follow her rules, she calls them out. Quinn is sometimes easily angered when people don't follow her directions, but deep down doesn't really mean some of the things she says.

Sometimes when she's not working, Quinn can be a bit devious. She doesn't mind getting into trouble and causing a ruckus around others, because she thinks of it as fun and stress-relieving. She enjoys pulling pranks on others, or straight out just annoying them and seeing their reactions.

Quinn is able to use her surroundings to the best of her ability. Her city has a ginormous junkyard where mechanics like her go and get their stuff for free, since most of the supplies sold in stores is very expensive. However, the quality of these items are not usually as good of quality as the ones that are in stores, but Quinn doesn't let this discourage her. She salvages things like broken extreme gear, toys, cars, and pretty much whatever else she can find. Since things are only dumped in the junkyard once every week, Quinn always makes sure she gets there first.

Sometimes when she's not in the city, Quinn works in her basement to improve on her mechanic skills, spending hours to just have fun inventing whatever she pleases. She claims that working on even the smallest projects can sometimes be soothing to her, since it is something that she enjoys.

The thing that Quinn is most skilled at creating are extreme gear. Several times a year, she designs and creates extreme gear for several people in Steampunk City who want their own custom creations. She can create speed, air, and power types of extreme gear, with whatever things people want added to them as long as they are balanced out. The most fun part of all of this is Quinn's ability to design and paint on whatever extreme gear she makes, using several different watercolors and patterns to make her extreme gear unique.

Though extreme gear is something that Quinn can easily make, she also creates other cool things like robots and weapons. Her robots aren't like the giant ones you see in the movies, but still have lots of work and effort put into them. Quinn currently has a small assistant robot named Copper, who has been broken and fixed several times, and he still functions almost perfectly after several years of hard work.

Quinn has also created several weapons and armor in the past. Though she doesn't fight much, on rare occasions people have battles in Steampunk City, and pay Quinn to create cool weapons are armor for them. However, she doesn't always do it, but if she sometimes wants to test things out, she'll let people use them and then watch the fight for herself to see how her creation functions.

As stated earlier, Quinn really enjoys designing and painting. This cat always puts lots of thought into the design of what she builds, and paints it with care. She has designed extreme gear and weapons several times, and every single one has a unique pattern that matches the owner's personality and likes. Sometimes, Quinn just paints for the fun of it, and is currently is working on a mural in her room.

Another resident of Steampunk City, Quinn and Arabella are childhood friends. They think of themselves as an unbeatable duo, and often hang out together building things and causing commotion in the city.

Retrieved from "https://sonicfanon.fandom.com/wiki/Quinn_the_Cat?oldid=1800674"
Community content is available under CC-BY-SA unless otherwise noted.