Notroyalty, the author of Queen Cyrenae the Bee, considers this page to be unfinished. As such, some sections may change. 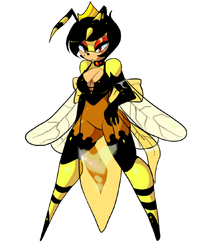 "I'd suggest you keep yourself relaxed before this. It's easier to lose if you stop caring." - Cyrenae challenging another ruler to war.

Cyrenae is a tall, curvy queen bee. Her attire is made up completely of expensive fabrics, normal and sheer, and leather. Her haircut is short, and is sometimes seen covering the side of her face in dramatic scenes. She wears a plain golden crown between her antennae, and a black choker decorated with rubies. There are black stripes going down her lower legs, her antennae, and on her arms despite being covered. Her wings are much longer and she is much taller than normal bees. She is always sitting up straight in her throne, or while she stands she has a very strict posture. She normally smells strongly of sweet honey. She is seen holding two swords in combat, similar looking to a Queen Bee's Stinger. These swords possess venom.

When Cyrenae is around, there is usually a regal and composed air to her. She often keeps quiet unless she needs to address something, and if she is upset, her voice will raise, but she will not attack you unless needed. Cyrenae often hides her emotions, having a mean-looking resting face. She seems completely numb, and acts as if she feels nothing for anybody. It is rare that someone can get her to smile, let alone laugh. She is very wise, as her servants will come to her, asking for advice. She has been challenged multiple times for her throne, killing whoever came up to this challenge. Though, she barely speaks in conversations, she will tell orders to bees frequently. Even when thanking people, she will simply not and say "Thank you." Cyrenae has a bit of a hot temper.

Cyrenae was born under royal blood. Her parents ruled over Mellifera sweetly before she had came along, obviously. Cyrenae was raised to be exactly like her father; but she became a bit overpowered and took over after he died. Her mother soon died after him, but she didn't much care for them due to only seeing them as teachers. She keeps herself independent after this, pushing away any male that tried to become King if she doesn't find them useful. Though she is busy often, she likes to sit and relax over her kingdom and watch people work for her. She later feels that her kingdom was too small, so she turns to world domination as a way to fix this, and often causes war between her kingdom and weaker ones. Of course, this is why she is a strong villain. She has even gotten close to killing one of her enemies, before the enemy was saved. This enemy was Nile. Cyrenae was born with the ability to generate toxins and venoms, poisoning rulers of strong kingdoms to take them over by turning their drinks into venom or poison.

She had become a side villain to Nile the Cat's story, and a main villain to Mildred the Cow's.

This Queen doesn't just have strong stingers as weapons - she has the ability to create and manipulate acidic poisons, throwing them at her opponents or force-feeding them. She is ruthless with these abilities, and will kill you. Oddly, this doesn't affect Mildred.

Cyrenae often uses her wings casually. She does walk, but mostly to travel, she will use her wings and hover. This causes one of her weaknesses to be water and storms - as she can't fly when her wings are wet. She is also very careful with her wings, as they are fragile if you cut them or injure them, and she will have to wait weeks on end to heal them.

Retrieved from "https://sonicfanon.fandom.com/wiki/Queen_Cyrenae_the_Bee?oldid=1826343"
Community content is available under CC-BY-SA unless otherwise noted.