Start a Wiki
This is an article about Puny the Crow, a character created by Fox,Fox,Cat on 06/9/2015. 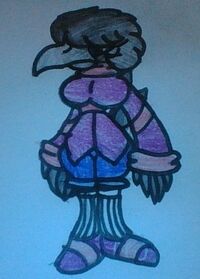 Puny is a frail and sickly Mobian Crow with her feathers combed back as well as forward, much like hair or fur. She wears a rather odd long-sleeved sweater-like shirt with a zipper over her stomach. She also wears slacks that are rolled up, which reveals her knee-high socks, and Puny wears tiny dress shoes with the same color theme of her sweater-like shirt.

Puny is almost a young adult, but she still acts slightly immature. She likes to go out and have fun with her much older friend, Huffy, despite her being frail. She wants to become as strong as her best friend, however, her disease keeps her from being able to even defend herself. Puny tries her best to stay out of trouble, but it's hard with a friend like Huffy, whom always starts fights with the wrong people.

Puny seems to dislike people, besides Huffy of course, because she's afraid they'll harm her. She tends to stay to herself, and shoves others out, out of fear. Her fear stems from most people in her life, besides her parents and Huffy, trying to hurt. The people she fear mainly do it physically do to her being frail.

Puny, who's real name is Prune, was born with unnamed, unknown disease. It generally made her muscles way weaker than they were meant to be. Her parents did everything to cure it, but nothing worked. Prune's parents did mostly everything for her, from her early age. Until it was time to go to school. The first year was pretty good for Prune, she tried to make a few friends, but mainly ended up keeping to herself. The second year, wasn't as good as some of the children would tease her for keeping to herself...In the third year, it only got worst....

Prune would get beat up by some of her fellow students, because she wouldn't talk to them. She would endear the rest of the third year and all of the fourth year. Until a much more violent one of her peers started to beat up the people who used to beat her up the same way. That peer was none other than her soon to be best friend, Huffy. The Mobian Spotted Hyena greeted Prune with her(Huffy's) real name, Hunette. Prune introduced herself, and the two became fast friends. Eventually, Hunette would affectionately refer Prune as Puny, and, in turn, Prune, now named Puny, referred Hunette to Huffy.

Soon, the two were pulled from school for their respective reasons (Puny for being sickly; Huffy for being overly violent). The two would be homeschooled for the rest of their education. The two are now going to be young adults and they need to learn about the outside world that they hate/fear...

Puny lacks any powers, due to her sickness.

She has no known abilities either. Other than ones that require an individual to be intelligent, in which she have quite a few abilities, such as strategy planning and faint hacker skills.

The only skills Puny is known to have is hacking skills, which she acquired through homeschooling.

She's really frail, so she'd be able to be taken out pretty quickly.

Retrieved from "https://sonicfanon.fandom.com/wiki/Puny_the_Crow?oldid=1600709"
Community content is available under CC-BY-SA unless otherwise noted.