Start a Wiki
This character is a recolor. Please consider drawing some of your own art, or removing the recolored images.
Pummi Wolf 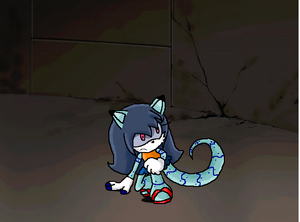 Her long tail has a life of its own and provides useful in battle or aid
Quotes
"That bites... but, so do I!"

Pummi Metalthorn is a young wolf child born to Pillar and Powder Metalthorn on November 6st. Currently ten, Pummi has spent her entire life just exploring and finding new adventures along the way! Pummi is single, and has yet to find someone she shows the least bit interest in. She does not have a home currently, but often will hang around certain spots for a few days if she feels the need to take a small break before she resumes.

Pummi is on the Hero side, but she does not have any specific powers developed just yet. So she relies heavily on her abilities.

Pummi seems to be cute and childish, but she is really a deeply troubled girl. She isn't mean or rude or anything but she always seems to be tense, on edgem and blunt. If you slack off or do something that doesn't please her she'll give you a mouth full and tell you off for it.

When meeting new people, Pummi tends to have an attitude. She does not mean to, but it just happens...

Pummi always tries to make herself seem intimidating, due to her young age. But she tends to fail quite misserably and others just call it cute acting.

Pummi is a milky blue colored wolf girl. Her skin, being her muzzle and chest and tummy area is white, while the inside coloring on her ears is a very faint blue-white. She has dark blue markings all along her body and fingers. But strangely on the tips of her ears is black coloring, like a deer would have. Her eyes are light pink, very bright against her fur. Also noticeable is how un-wolf-like her tail appears, as its very long and curled.

Also revealed is a purple gem, underneath of her bangs. Pummi's hair is deep blue-gray, with spiked bangs and a single spiked side part that is about neck length. Her long hair is about waist in length with a flip.

In very cold areas she'll wear a fake fur-like blue jacket-like dress and a pair of red boots or shoes.

Retrieved from "https://sonicfanon.fandom.com/wiki/Pummi_Wolf?oldid=1785369"
Community content is available under CC-BY-SA unless otherwise noted.