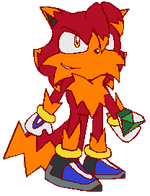 Pulse is a 16-year-old anthropomorphic wolf who hails from the future. His body is covered in red fur, with orange-coloured muzzle and belly. He also has orange fur on his ears, wrists, ankles and the tip of his tail; his eyes are amber-coloured. He has two large bangs of hair growing from his forehead, and a long red tail tipped with orange fur. He wears a pair of white gloves and blue sneakers, with golden rings around his wrists and ankles.

Pulse is very competitive and over-confident. He is outgoing most of the time, but this is sometimes a disadvantage to him, as he often irritates people with personal remarks; and is often bashed in the process, leaving him with minor injuries. Regardless, he can still make friends with more tolerant people, and loves having a few friendly rivalries to keep him going.

Pulse was trained from an early age to both see and manipulate the power of aura, which gives him the ability to sense danger more quickly than others, as well as being a great advantage in battle. Despite his somewhat immature personality, his aura-sensing ability makes him very intelligent, giving him superior problem-solving skills. He is also something of a skilled swordsman, and fights with great agility.

A drawing of Pulse, created in MSPaint by Hyper86.
Add a photo to this gallery
Retrieved from "https://sonicfanon.fandom.com/wiki/Pulse_the_Wolf?oldid=1552897"
Community content is available under CC-BY-SA unless otherwise noted.