Start a Wiki
This is an article about Puff the Hedgehog, a character created by Molly.

Puff the Hedgehog (ハリネズミのパフ), also known as Puff (パフ), is a 14 year old hedgehog created by User:Puff the Hedgehog and is her fursona. She is from the planet Mobius and was born on 145, 3223 in Mobius years, September 17, 1998 in Earth years. Her love interest is Alex the Hedgehog. Puff's original love interest was the lynx villain Cyan the Lynx. She is voiced by Kristen Stewart in the English version and Etsuko Kozakura in the Japanese version.

Puff is a female Mobian hedgehog. Her fur is purple, her skin is peach, her muzzle is peach, and her inner ears are peach. She has red eyes. Her hair is styled up similar like Amy's. Puff has hot pink ribbons on her hair. Puff wears a cyan dress w/ a pink heart and light purple "sleeves". She wears cyan flats.

Puff was born in sometime on 145, 3223. Her parents loved her like nothing else. But one day, Puff was kidnapped by Dr. Eggman. Pretty soon, Cyan the Lynx saved her from him. And pretty soon, Puff had a crush on him. But when she was 12, she realized that Cyan the Lynx was secretly a villain and he abused her. Puff ran away from him and met Alex the Hedgehog, her true love.

Puff is a tough and caring person. She will sacrifice herself just to see her friends to not be in trouble. She is also very loyal and is not afraid to stand up for what she believes is right. Puff has a very good heart, she never gives up, and is one of the most optimistic and cheerful character. Puff is always full of hope and is always cheering on for the good side of things. She almost never seems to find anything hopeless.

Puff possesses super speed and can go as fast as Knuckles. Although she doesn't have super strength, she can smash tough objects. Puff's primary method of attack is her version of the Piko Piko Hammer, which she uses to inflict major damage to her enemies. Puff also possesses telepathy, or (for short) can read minds.

Puff's weaknesses include being a little clumsy. She also shows heavy endurance as she is able to recover from powerful attacks quickly. She also might have air sickness. Also, she only has one phobia: Dystychiphobia, meaning she has the fear of accidents.

Puff has never died. However, there were times she almost died. The only one was being froze to death. However, there are also times that she committed suicide. But that was only when she thought she heard Cyan coming after her.

Cyan the Lynx is her former love interest. Ever since the day Cyan saved her, Puff thought that he would be the love of her life, but she was wrong. He was a villain and an abuser. Cyan would constantly abuse Puff. So, Puff ran away from Cyan, fearing that he may come back. It is unknown if Cyan is still alive or still on the prowl.

Alex the Hedgehog is her love interest and boyfriend. Ever since the day Alex first met Puff, she feared that he was an abuser. But, he wasn't. Alex treated her like a princess, not like dirt. Their love become more affectionate and after a kiss, the couple became official. But, Puff still worries if Cyan will come after her.

By using all seven Chaos Emeralds, Puff can initiate a super transformation called Super Puff. This is by far Puff's most frequently used transformation. In this state she can fly more faster, stronger and nearly invincible. She doesn't need rings to maintain this transformation.

"Hi. My name is Puff Rosaline Amara, at your service."

"Never EVER treat my friends like that! Why do you even do that?!"

Her new design. Credit to Molly 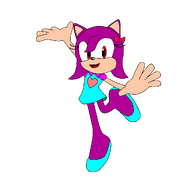 A recolor of Amy to Puff. Credit to User:SonAmy girl12 26

Puff on the Charrie Maker. Credit to Molly

Puff on the Furry Doll Maker. Credit to Molly
Add a photo to this gallery

Chasing the Sun by The Wanted

Retrieved from "https://sonicfanon.fandom.com/wiki/Puff_the_Hedgehog?oldid=1408686"
Community content is available under CC-BY-SA unless otherwise noted.