"The mind is like a library with its books unsorted, and its doors ready to be unlocked."~Deraj Ivan Bradanska.

Membership within the Psy-Guard is very to difficult to achieve. One of the defining characteristics to become PSI-Trooper is you have to be psychic or posses some form of psychic ability for starters,(there are non-psychic members, but they are not troopers, they are usually support staff.) Psychic Guardians have to go through rigorous and mentally hardening training before they can join the ranks of the Psychic Guardians. Many become insane, others join and still are a tad insane from their intense mental and physical conditioning.

The Psychic Guardians focus on the individual and how his/her own special talents can benefit the squad as a whole, as well as the army. Psychic Guardians are known to use squad based and support tactics on the battlefield, blended with many other positions their unique individual powers can be used for.

"We are called upon!"~Standard rallying cry of the Psychic Guardians.

Although many would view Moebians as atheist or at the very least agnostic, many view the PsI-Guard as a sort of cult from a prime worlder perspective. What is known many psychic soldiers believe in the force of "Raj",or "Mysterious Force". While not preached about or taught in public schools on Moebius, Raj is still seen as an essential force that Deraj Bradanska teaches to his psychic "students".

The Psychic Guardians are an international organization and special military force with divisions on almost every continent on Moebius/Anti-Mobius, as well as many areas and military installations on Mobius and other worlds. Their central base of operations is found in the cold regions of Rosania, (named after Deraj's deceased wife Rose Bradanska.) 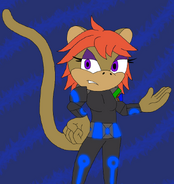 Sgt.Tes the Monkey of Mystic Company.

A Female Psychic Coordinator (Used to observe and keep unison and coordination in the battle.)

A young Psychic Cadet in action

The AMAs MK-53 Psi-Sniper Rifle purchased by the Nevell-Scott Corporation on Turanta.
Add a photo to this gallery
Retrieved from "https://sonicfanon.fandom.com/wiki/Psychic_Guardians?oldid=1537923"
Community content is available under CC-BY-SA unless otherwise noted.