"YOU PEOPLE ARE STUPID THAT ANIME IS CLEARLY HORRIBLE!"

Proto is a robot made by advanced scientists. He was made in purpose of creating Chaos Emeralds with science, and not magic.

Prototypes (prototypes of himself)

Proto is a robot made out of metal, however the metal legs and metal heads are covered by green electricity, same with eyes. His nose is a small screw, and his mouth is square-like made out of metal. His shoes, hand and tail is clearly made of metal without electricty covering it, and he wears a lab coat that covers his whole torso. He also wears a golden badge on the coat. The electricity on his head looks like a hedgehog hair.

Back when he was created, Proto was a serious, emotionless and strict robot. He only cared for his job, it was his whole purpose, after all. However, when sent to outside of his Lab, he was fascinated, and he became a bit less serious. Being with the main cast, mainly with Trick, made him understand "personality" and "emotions", thus mimic theirs and soon, knowing how to hack his own systems, created his own personality. Proto is still a bit serious and strict, but he normally feels everything else, in point of feeling sadness for the prototypes that came before him and his creators that mysteriously disappeared.

Proto has a amazing technollogy, so here's a list of what it can do:

However, Proto needs to be focused when doing those, and if water or fire is thrown at him, all the powers that were being used on that moment will be temporally deactivated.

Many, many years ago, scientists were trying to make the perfect mechanism. All of them ended up having defects of some sorts, so they ended up scrapped and abandoned on a old room. After YEARS of failures, the scientists finally built Proto. Proto didn't show any defect, so the scientists gave the advanced technollogy to Proto. A organization started to attack the Lab, and some of Proto's creators died, and others disappeared, thus leaving Proto alone on the world. Since he didn't knew how to do perfect science, he did horrible experiments, some ended well, other ended up wrong. After teaching himself on how to do better science, he undo the experiments with animals (seriously, no one wants to know about it) and, after meeting the main cast, he started to feel. However, he still seeks on how to activate the Prototypes that came before him, and still trying to find his creators, and still hiding his past from his friends. 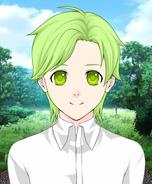 A human Proto made on Rinmaru

Add a photo to this gallery
Retrieved from "https://sonicfanon.fandom.com/wiki/Proto_the_Robot?oldid=1826431"
Community content is available under CC-BY-SA unless otherwise noted.