Sally is a chipmunk. 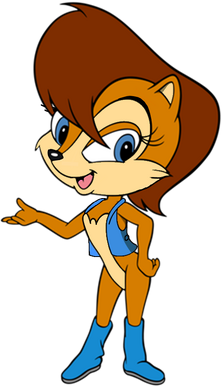 Originally, Sally was a pink chipmunk with dark brown (often confused as black) hair in a ponytail and cream colored markings. She wore blue boots with white highlights. However, this design eventually changed. Sally's fur and hair were changed to brown and auburn, she was given cheek tufts, the ponytail was scrapped, and her boots no longer had highlights. In season two of the Sonic the Hedgehog cartoon, her design was further tweaked. Sally now had pupils and wore an open blue vest which matched the color of her boots.

Sally in the "Heads or Tails" pilot

Her most recent design (comic only). 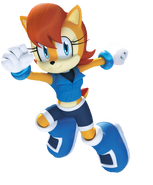 Add a photo to this gallery
Retrieved from "https://sonicfanon.fandom.com/wiki/Princess_Sally_Acorn?oldid=1858354"
Community content is available under CC-BY-SA unless otherwise noted.