Template:SFW Awards Nomination This character exists primarily or exclusively within Julia Finitevus's continuity. Information in this article may not be canonical to the storyline of any other Sonic fanon continuity.

This is an alternate universe version of Princess Penelope the Puppy created by Julia Finitevus. The original version was created by TZ. 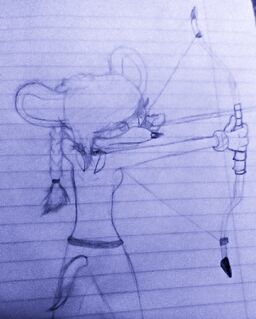 Princess Penelope a. k. a. "Zeal R. Smith" is a character originally created by .:.TellZeal.:. and was later adopted by Julia Finitevus. This counterpart of Penelope exists exclusively in Medieval Mobius and is the main protagonist of Origins of Colona.

Princess Penelope was born to Fellis Tuwark and Houysaro Tuwark. When she was only three years of age, her father was brutally murdered right before her eyes by a tyrannical group known as the Flock Council, scarring her for life. Penelope resolved to do whatever possible to bring the Flock Council's reign of terror to an end permanently. Her sibling Ambies became her biggest supporter, while Penelope's mother Fellis became more and more withdrawn due to Houysaro's murder.

At some point during Penelope's childhood, Fellis married a man named Wertony Craingents. However, the marriage was not a happy one, since Fellis was still suffering from the loss of Houysaro. When Penelope was about nine years old, her mother committed suicide because she was unable to take the pain of the loss of Houysaro much longer. As a result of Fellis' death, Wertony became verbally abusive towards Penelope and sister Ambies. He was abusive to the point where Penelope eventually was forced to run away from home, taking her sister Ambies with her.

The Colona Rebellion and Zeal's Exile

Penelope and Ambies eventually joined the Colona Rebellion and adopted aliases to conceal their true identities for the time being. Penelope at age thirteen, taking on the alias of Zeal R. Smith, became second in command to the former ruler of Colona and the current leader of the Colona Rebellion- King Uwa Iwa. She maintained this position until she was fourteen, when Uwa Iwa died under mysterious circumstances. Thus, Zeal was forced to become the leader of the Colona Rebellion and learn to be able to command them in the war against the Flock Council. Ambies became Zeal's advisor midway into the war.

The war against the Flock Council was eventually won, but by the time the Colona Rebellion was victorious, the rebels themselves were broken up, scattered, and were very weak. They had been losing many battles lately and even Zeal herself during the final battle questioned whether or not they would win or be crushed permanently. The Colona Rebellion managed to eventually win the war, but at the cost of many lives, including that of Zeal's sister Ambies. Not long after the war ended, Zeal had held a ceremony honoring the fallen Colona rebels and her sister. About six months later, an enemy kingdom conquered Colona and as a result Zeal was exiled. She and a group of rebels are currently trying to figure out a plan to take back Colona.

Penelope's current personality is very similar to her original counterpart's- she is occasionally a rebel towards those she trusts, she is fearless and loyal. In addition, unlike most women who are princesses, Penelope is independent. She is very adventurous and often takes many risks. However, Penelope does have some differences from her original counterpart. She tends to be more hotheaded and sometimes says and or does things without thinking about it- often regretting such actions later. She also has a great sense of determination and is willing to fight for what she believes in when no one else will.

Penelope often takes the lead on certain things and this was especially shown during the Colona Revolution- when she was forced to take the lead when the original leader, Uwa Iwa, died of mysterious causes. This caused Penelope to have a heavy responsibility at young age, thus forcing her to learn important leadership skills in just a few months- when for others it would have taken years.

Penelope has the rare power to sense major future events that could potentially be dangerous to the fate of Medieval Mobius. This power is often called Timeline Meditation, but it has been known by names such as the Knowledge Sense. Penelope also can see fairly well in the dark and has extraordinary hearing. She can also sense the presence of other people around her, which gives her a minor advantage in the battlefield. She also has skill in using the bow and arrow as her main long-range weapon and her Gogi purse as a melee weapon. Penelope also possesses the ability to manipulate ice.

Penelope's Timeline Meditation is not perfect. For one thing, she has to be very calm and peaceful to be able to use it. She also has to be in a quiet environment as well, because if she is not, she can easily get distracted. Penelope's sensitive hearing also has a downside- noises too loud can easily damage her ears. She also is not as skilled in melee combat as she is in long-range combat. This can present a disadvantage when she needs to use a melee weapon. Also, Penelope's power in cryokinesis is very limited and cannot be used in hot weather.

When she was in the Colona Rebellion, however, she shed this outfit in favour of a greyish-blue turtleneck, grey pants- occasionally with a matching belt- and knee high white boots with blue trim. 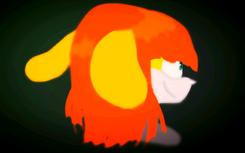 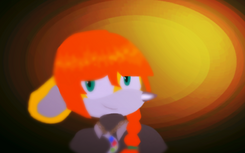 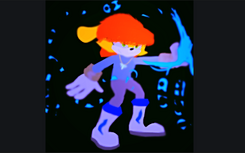 Penelope using her Cryokinesis
Add a photo to this gallery
Retrieved from "https://sonicfanon.fandom.com/wiki/Princess_Penelope_the_Puppy/Julia%27s_Version?oldid=1800723"
Community content is available under CC-BY-SA unless otherwise noted.