Start a Wiki
This is an article about Princess Overtone, a character created by Frozen Scorpio on 01/16/2016. 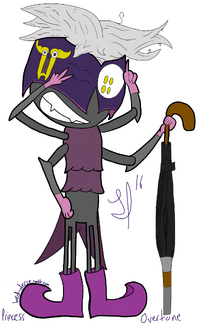 I mean, it's kind of obvious exactly who this is, there's no real point in thinking about it when the answers are so clearly there. But hey, as they say, the show must go on!

Overtone has the body of a small gray humanoid, with her face instead being the Mask of Pride, heavily resembling a spider with two large white orbs for eyes (each having four small pupils). She has a small torso with four skinny arms. She uses her for legs as if they were two, as two go in each of her 2 purple shoes. Her wardrobe consists of a frilly purple dress that ends barely at her midriff, but with long coattails that extend to the ground, as well as dark gray gloves. In actuality, her body is made of millions of tiny spiders that function as one being.

Overtone, having become the Arch-Face of Pride, lives to entertain the masses in whatever way possible. She takes great pride in being able to almost hypnotically please crowds with her every action. She likes to be the center of attention when others are around, fooling them into believing her to be just a little clown who has no right being an Arch-Face. She even acts during battle, usually letting her opponents win after just one hit (provided she forces them to always use a different attack to prevent things getting stale for the hypothetical audience.)

Deep down however lies something much more complicated. Overtone is truly not influenced by being the Arch-Face of Pride at all, it's all just an act (just like her usual shtick.) Overtone is truly neutral on her position and is not afraid of attacking or even betraying the other Arch-Faces to further her goals. She seems to be testing her opponents, often giving them gifts before a big fight with the other Arch-Faces if she believes they need the boost.

Unlike the other Arch-Faces, Overtone's mask was not able to fully control them upon attachment. Having not been able to detect much pride on the host, the mask attempted to move on, but was somehow bound to it's current host by what can only be described as "sheer willpower of the host," forcing them to morph into Overtone's current form. She now travels the world, often stopping to check up on how the other Arch-Faces are doing as well as how those who should be her opponents are doing.

Events of the EQuartz Committee: Season 4

To be written later.

Overtone's powers seem almost otherworldy in comparison to the other Arch-Faces. Her primary ability is to be able to freeze time for dodging attacks or speed up her own in comparison. Other than the listed uses, Overtone can create a bubble around her and others to freeze time AROUND them, allowing anyone within the safezone free movement, this often being used for when she wants to speak privately with someone. Her other power is the ability to generate thin waves of web that at first seem like nothing. However, it can easily become a big problem for as soon as ten seconds of consecutive waves, quickly creating thick layers of web that can really impede movement. Overtone alse has a bizarre ability to manipulate spiders, from simple mind control of any spider to go so far as to convert the state of matter of spiders, being able to mold a group of them into solid objects such as pillars, gauntlets, etc. Overtone can also "infect" other weapons by coating them in spiders then changing their appearances and abilities. Any weapon that is infected permanently dissolves into more spiders after full infection, which she can then create multiple copies of at similar quality to the one that was absorbed, but depending on a weapons size one may be able to salvage some of it before it's too late. As her body is made of spiders, Overtone is able to shapeshift into anything she is currently viewing and can essentially dodge projectiles by creating holes in her body to catch and infect said projectiles, though rarely uses this to "play up the drama." She always seems to know everything that is going to happen from when she donned the mask to it's inevitable destruction and her freedom, and even before that, but she hides that last fact as well as she possibly could from others.

Overtone's "weakness" is more her overreacting to otherwise average attacks. When the camera rolls, she becomes its puppet, always playing up the drama of everything she does and encounters to entertain the few people who would've not only survived the Fasin Invasion but have also reached any form of media-sharing source during this time. However, when not acting, Overtone, in truth, just has no exploitable weakness, simple as that, however is obviously not invincible.

Despite the moniker of "Princess" being in the title, Overtone is not truly a princess. It's a self-entrusted title, calling herself the princess of spiders.

Retrieved from "https://sonicfanon.fandom.com/wiki/Princess_Overtone?oldid=1690124"
Community content is available under CC-BY-SA unless otherwise noted.